Followers is an Action-Attack-Prize from Cornucopia. It is not in the Supply, and can only be gained through playing the Tournament

card. It is a powerful combined cursing and discard attack, which makes it often the first Prize to be taken. Followers also puts an Estate

in your deck: this plus the cursing attack creates a swing of 2 VP in your favor, but it also can clog up your own deck as much as it does your opponent's.

There's no strategy article for Followers.

It's a pretty great Prize, though. It gives a swing of 2 VP by giving out a Curse

and giving you an Estate

, forces the opponent to discard, and gives you +2 Cards so you get some benefit too. It's usually the first Prize to go, unless there is another curser on the board or the trashing is extremely powerful.

Note that it gives both you and the opponent exactly one dead card: it will junk your deck as much as your opponents, meaning it can be difficult to keep your own engine running if you begin to use Followers vigorously. However, this does generate a swing of 2 VP, which is pretty powerful. 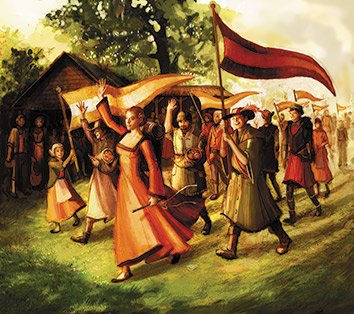 And in place of Followers I had a VP-Action card. It didn't work out because, you know, you buy VP cards later in the game, for the points they're worth. I just couldn't make a VP prize exciting enough without making it too good. It couldn't be something you built your deck around, because you might not get it and at most got one. Something like Harem or Nobles just wasn't going to look pretty next to the other Prizes, because part of what you "paid for" was the 2 VP. Anyway Followers, who doesn't like Followers.

Followers meanwhile started out as a Goons

in Prosperity. I tried a bunch of "choose one" cards in that slot, and then tried this attack-two-ways, profit-the-opposite-ways thing. It was the same except it cost

and gave you a VP token instead of an Estate. It was too strong. An Estate is obv. a lot worse than a VP token, and being a Prize means it doesn't get to hit you that often or early either.
—Donald X. Vaccarino, The Secret History of the Cornucopia Cards