Forge is an Action card from Prosperity. It can be a powerful trasher and remodeler, but it is often hampered by its high cost and relative lack of flexibility.

There isn't a Forge strategy article.

Forge is an awesome trasher which can trash any number of cards at once. Unfortunately, it costs

, so you can't use it for early-game trashing like a Chapel

. It can be used for mid-to-lategame trashing to make an engine super-reliable - if it was sort of kicking into gear already, enough to get you

. It is a good addition to an engine withstanding cursers or looters; and after the engine is built and the starting cards are trashed, Forge can cannibalize engine parts into Victory cards, like turning a Village

To make use of Forge best, you really need to have big hands, where you can match it up to a lot of junk to trash and to cards which add up to the right cost.

The options available to Forge depend heavily on what is on the board as well as what is in your deck. It can always be used to trash copper and curses, in addition to whatever other cards are being forged together, because these cards cost

, always works with Forge, making the card a bit more powerful in Colony games. These treasures require cards of cost

to be forged into victory points.

, you can Forge a stack of Coppers into a Province. On the other hand, with only a couple of them in play you stand to lose value from each card you trash. With no reducers, two Silvers

gives you a Gold

easily enough. But after a single Highway, those Silvers cost

each while the Gold is now

, so you'll need to have a pair of them plus an Estate

) to get it; with another Highway, you'll need four Silvers to manage a single Gold!

Of course, you can also just repeatedly Forge the same two Fortresses

into Provinces. So there's that. 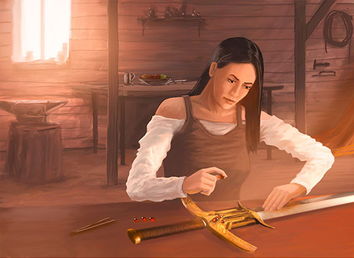 . The "in coins" clause was added late, to simplify Alchemy interactions.
—Donald X. Vaccarino, The Other Secret History of the Prosperity Cards