Fortune is a Treasure card from Empires. It doubles your current amount of

when you play it, which is a potentially extremely powerful effect—so much so that it only works once per turn, and even then its cost of

makes it arguably the most expensive card in the game. It is part of a split pile, with 5 copies of Fortune sitting under 5 copies of Gladiator

, and it rewards you with free Gold

if you gain it with a Gladiator in play. 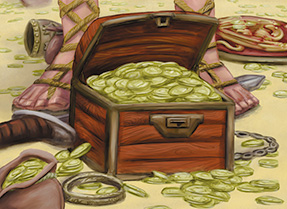 ...Fortune. Which doubles your money, yeeha. And may come with some Golds; a reward for the players with Gladiators. If you were wondering how much doubling your money was worth, well, about

, but you don't need it all in advance. And it's not cumulative because even at ~

that was too much. It can help pay for itself, I will just point out that part.
—Donald X. Vaccarino, Empires Previews #2: Split Piles

Fortune started as its own pile. It was a

card back when they could all be bought with no

. The first version was

up front please. That's how good double your

is, taking into account that sometimes it helps pay for itself. And originally you could use multiple Fortunes in a turn and well doubling doublers is always trouble (Throning a Throne

isn't actually doubling a doubler, person who thinks of that; however King's Court

on King's Court is). There were "discard your hand" versions, but in the end it got a harsh clause to limit you to one doubling per turn. When Fortune became a split pile card, it got the when-gain ability to tie in to Gladiator.
—Donald X. Vaccarino, The Secret History of the Empires Cards