Golem is an Action card from Alchemy. When played, the Golem digs through your deck for two Action cards (other than Golems!) and makes you play them. This can be very powerful, since, like a village, it lets you play two Actions, but unlike a village it doesn't need to have Actions themselves in hand at the same time. However, it's also quite expensive—at

, it's effectively more expensive than Gold

! Playing Golem can be dangerous since you have to play whichever cards the Golem reveals; it may pull up cards you don't want to play, such as mandatory trashers in a hand full of Provinces!

Golem can be very powerful, both drawing cards and playing them, but its main drawback is its cost of

. If you open Potion, then it's quite likely you'll draw

and will have to deal with the Potion as a dead card until you draw it with enough other treasures. On the other hand, if you wait to get the Potion, then by the time you're confident you can get

, you probably don't want to spend a turn buying a Potion because you can already afford expensive engine pieces that you need sooner.

This drawback of Golem is largely mitigated in games with other

-cost cards, where transitioning into Golem is much easier.

Alternatively, if Golem is the only

-cost card on the board, it's probably viable only if there's no other way to build an engine but the Kingdom has cards like Colony

which make an engine much better than Big Money.

Golem enables a few cute tricks and combos which are discussed below. 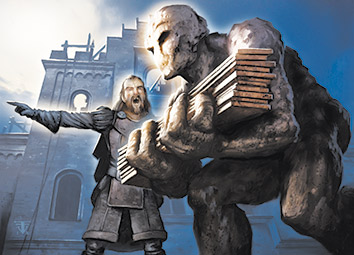 I tried several cards for this slot, but once I tried this one it didn't change. I considered having a Homunculus instead in this slot. Homunculi are specifically alchemy-related. But a Homunculus is a small guy, and I already had Familiar for that. I wanted a big guy, dumbly performing tasks.
—Donald X. Vaccarino, The Secret History of the Alchemy Cards