Great Hall is an Action-Victory card from the first edition of Intrigue. It is a dual-type card, which means it interacts with cards such as Scout

which affect Victory cards, as well as cards such as Scrying Pool

gets two bonuses when used to gain Great Halls. Great Hall is a cantrip and is worth 1

, so it's a Victory card which is not a dead card and doesn't get in the way of your other Actions.

It was removed from the second edition of Intrigue, being replaced by the more useful Mill

and, unlike an Estate

, does not take up space in your hand. While Great Halls may seem like they'd be a good buy pretty often, their opportunity cost is important early in the game, and they are also weaker in the presence of Discard attacks.

Early in the game, Great Halls are usually a poor buy because they don't benefit your deck in any way other than

, and there are usually other

cost cards that do, such as Silver

Like other cantrips, Great Hall is much less desirable when your opponent is playing discard attacks. If you have a Great Hall when you are hit with a Militia

In the absence of combos and synergies that strengthen the card, Great halls are often good to buy only later in the game. Mid-to-late game, if one ends up with

and 2 buys, they are a good addition to the deck. When it is likely that one will cycle through the deck again, two Great Halls are likely preferable to a Duchy

will be compensated for by the increased chance of buying more Victory cards later.

is probably the strongest combo with Great Hall, as Ironworks can be played to gain a Great Hall and get +1 Card, +1 Action. Scout

can draw Great Halls into your hand and then let you play them. Crossroads

benefits from Great Halls in the hand, creating an additional card draw from each one. Cards that benefit from variety, like Menagerie

, also benefit from Great Hall, but it does not synergize as well with Horn of Plenty

because Horn of Plenty is trashed if used to gain a Victory card. Scrying Pool

also benefits from extra Great Halls--Great Halls increase the value of Silk Roads without slowing down your deck.

In games where Great Hall is attractive, such as in the presence of Ironworks, and especially when there are multiple synergies involving Great Hall, the pile will tend to empty very fast. This makes rush strategies stronger, and is important to consider when timing your purchase of Victory cards, or considering whether to attempt to build a slower-to-construct engine. 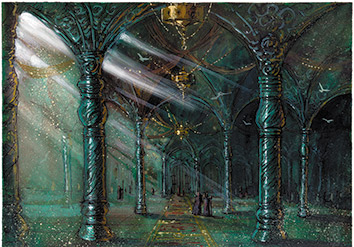 One of the oldest cards in the set. Originally it cost

. One day I realized the Upgrade

/ Great Hall deck was just too ridiculous, and upped the price of both cards. Later on I realized that Upgrade had been the problem by itself, and returned Great Hall to its original cost. It's interesting how interesting it is for a card that does nothing.
—Donald X. Vaccarino, The Secret History of the Intrigue Cards

For new players, maybe Great Hall is reasonable; it does nothing, but it can be interesting considering Upgrading Estates into them, or getting them for Conspirators

or something, and then uh well later on they are better than Estates at least. There are more good things to Upgrade Estates into now though, or power up Conspirators with; Great Hall was not competing there. A card that did something would be more interesting.
—Donald X. Vaccarino, The Secret History of the Dominion 2nd Editions