Groom is an Action card from Menagerie

. It is a gainer that offers a bonus depending on the type of the card gained, similar to Ironworks

Groom is the best of the $4 Workshop variants. Most Workshop variants are at their strongest when picking up cheap actions, and here Groom offers a stronger benefit than its counterparts.. Compared to Ironworks (which gives +1 Action when gaining action cards) or Armory (which topdecks the card gained), Groom gives a Horse which functions as a one-shot +1 draw. Draw is highly valuable in Dominion, and this bonus outshines the bonuses of similar Workshop-like cards and makes Groom viable in a wider array of contexts.

Groom is also among the best cards in the game at facilitating Rush strategies, in which a player attempts to lower three piles to zero quickly before other players can get control of their decks and begin scoring. Players familiar with Base Dominion may already know of the Workshop-Gardens rush, which involves gaining as many Workshops as one can and then emptying Workshops, Gardens, and Estates. While Workshop-Gardens is a relatively weak strategy, Groom rushes such as Groom-Gardens are much stronger. Because Groom gives +1 Card and +1 Action, it can be chained much more effectively in these decks and lowers piles much more quickly. Groom rushes work with any VP card costing $4 or less with Silk Road and Gardens standing out as the strongest. Rush strategies are also viable with certain landmarks like Tower or Triumphal Arch, where a player can empty Groom, a second stack of action cards, and Estates. 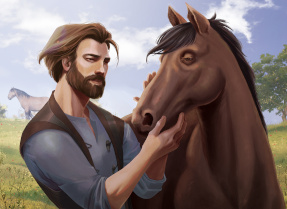 An early card. The only change was the precise wording, "Action card" rather than "Action."
—Donald X. Vaccarino, The Secret History of Dominion: Menagerie