Guilds is the eighth (and reportedly last) expansion of Dominion. There are plans for it to be released in spring 2013.[1] Very little is currently known about this expansion.

Donald X. posted on the forum that there will be at least one attack card in the set.[4]

As of March 24, it is now confirmed there will be 13 Kingdom cards. Furthermore, it has coin tokens that you can save to spend later, and cards you can get more out of by paying more for them.[5] 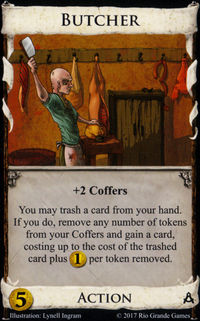