Harvest is an Action card from Cornucopia. It discards the top 4 cards of your deck and provides between

, depending on how many different cards you revealed. Like Menagerie

, it rewards you for having variety in your deck.

There is no strategy article for Harvest.

It's an okay source of terminal

. It's not that hard for it to consistently give

once you're out of the early game;

is also more likely than you think. The benefit of cycling 4 cards is also pretty good. However, terminal

just isn't that great of a use of an Action. In Big Money, Harvest is not exceptional, and in engines, using your Actions to draw your whole deck is typically better than getting extra

early. And if you draw your whole deck, then Harvest does nothing. Nevertheless, if you have reason to want

from Actions instead of Treasures such as a Menagerie

engine, you should keep Harvest in mind.

Since it discards the top of your deck, it can also work as a counter against attacks like Fortune Teller

, provided you don't play a card that gives you +Cards before playing Harvest. 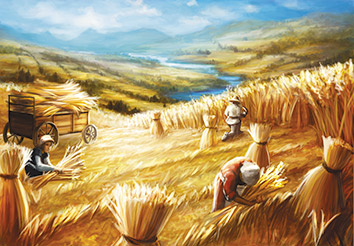 Once I had the variety theme, I had to make some cards that really highlighted it. I tried drawing cards until you hit a duplicate, and then I tried getting all the non-duplicates from your top 5 cards. Giving you

instead of the cards was what worked out.
—Donald X. Vaccarino, The Secret History of the Cornucopia Cards.

Harvest does the flip over cards thing, and I would try to fix that up, see if I could make a version that did not make your good cards go by.
—Donald X. Vaccarino, What Donald X. Might Do With a Dominion Time Machine