Herald is an Action card from Guilds. Like Golem

, it allows you to play Action cards directly from your deck. It is an overpay card that can place cards from your discard pile to your deck. This is great to set up a megaturn.

There is no strategy article yet for Herald. Feel free to add your thoughts!

In general, Herald does best on engine boards with good trashing, but no other village. The former is important to guarantee that Herald will reveal an Action to play, and the latter is important, because otherwise Herald is essentially irrelevant. Herald can also be useful on boards with light trashing, spammable cheap Actions (like Squire

), or with far-reaching deck inspectors (i.e. a card like Cartographer

). Essentially, any card that combos well with Wishing Well

will also do well with Herald.

A player might be tempted to think the overpay portion of Herald might be useful for setting up its played power, but unless you're overpaying by

or more, you're not guaranteeing anything. The overpay ability is more to get recently discarded or purchased cards back into play faster. 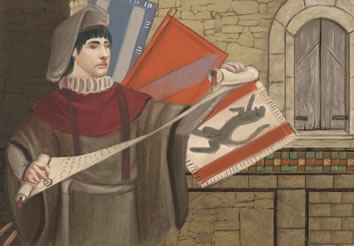 How about that medieval Poland? At last we come to the final day of previews. Herald is another overpay card. I could only fit so many themes into 13 cards.

Herald varies from "+1 card +1 action" to essentially "+2 cards +2 actions," depending on your action density. Aim high, that's my advice. When you buy Herald, you get to stack the deck for your next hand. No peeking into your discard pile first to see if you want to buy Herald or not; sorry, them's the rules. But if you overpay by

, you'll get to look through your discard pile three times; that's value for money. And you can use the overpay to put Heralds on top of your deck, and then when you play those Heralds sometimes they will announce more Heralds. It's Heralds all the way down.

Guilds has 8 more cards, and before long you will have seen them all. It will probably be available at Origins and will come out later this month in any case. It will probably show up on Goko about when it shows up in stores; I have been playtesting it. And then once people can buy it I will post a Secret History.
—Donald X. Vaccarino, Guilds Previews

The top is an old card, a less-crazy relative of Scrying Pool

that I tried out long ago. The bottom was just something else I could do with overpay that would feel different. I tried it first on Duchess's

top, then moved it to this card.
—Donald X. Vaccarino, The Secret History of the Guild Cards