In the early game, it can be used to trash Estates

and Shelters and gain Silvers

. In this role it might seem superficially similar to Jack of all Trades

, but it is significantly weaker at this since it does not draw up to 5 cards - just plain Hermit-Big Money probably isn't that great. It can trash cards from your Discard pile, which makes it a tad better trasher, though.

At some point, you can forego your Buy for the turn to transform the Hermit into a Madman

- you forego your buy in exchange for doubling your handsize on a future turn. You're not quite foregoing your whole turn because you did gain a

card and lose a Hermit, but you're not quite doubling a future turn because playing a Madman

starting from a normal 5-card hand will leave you with 8 cards and 2 actions, not as good as Tactician's 10 cards, 2 actions, 2 Buys. And since Hermit just looks at whether you bought anything, you can't do the equivalent of double Tactician.

If you use Hermit to gain a Hermit and buy nothing, then you've essentially spent your buy on a Madman. Not so bad.

Hermit may see extra use in games with Cursers. This will give the Hermit something useful to trash for much longer - and Hermit is pretty good at trashing Curses

in a thick deck, since it can trash from the discard pile. It also might increase the value of Madman turns - it might be harder to reach

for important cards when you're being Sea Hagged

all the time, but Madman will get you to your Goons

Hermit may be usable for mega-turns because of how Madman stacks. The first Madman you play in a turn gives you +4 Cards, the second would give you +7 Cards! Even with no other card draw, if you spend your Buys buying Hermits, Villages, Throne Rooms

, you might be able to pull off a mega-turn when you get enough of those and a few Madmen.

allow you to get effectively infinite Madmen, by moving Hermit when it would be discarded, so that Hermit loses track of itself when trying to trash itself.

If you have comments on whether these strategies are viable, or ideas for other Hermit strategies, please feel free to discuss it on the forums! 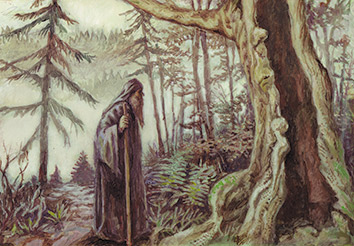 Hermit is another. He's normally content to just trash certain cards and gain some Silvers or something. But if you don't make enough trips into town, he loses it. He goes mad. And then he blows up one day in a fit of card-drawing. Which is my way of saying, well it's all there on the card. That stuff.

Hermit turns into Madman, a card that isn't in the supply. You can't buy a Madman; if you want one, you have to get a Hermit and then not buy something. And then you only get it once! Somehow it's worth the trouble.

Turning a card into a specific new non-kingdom card requires a pile of ten of those cards. Yes do you really need ten, I know. But you do. And well how much of the set wanted to go to that stuff, rather than say new kingdom cards? So in the end I just did two of those. Now you know one of them.
—Donald X. Vaccarino, Dark Ages Preview #3: Squire, Hermit, Madman

I quickly tried four variations on the top before settling on what it has. The premise was to let you trash cards that weren't in your hand; it had to also hit them in your hand so you didn't curse your luck on drawing those opening Estates / Shelters too often. Some of the versions trashed cards from the supply, a mechanic I'd first tried on a Seaside outtake, but it hadn't worked then and didn't work this time. And originally it trashed cards from your deck, but your discard pile gives you a similar selection faster.

I tried the bottom on another card that didn't survive, then put it here. Originally I thought I would have several cards that upgraded into specific non-supply cards, but each one both requires 10 extra cards to handle it, and gives me a card with a ton of text on it. So there are only two. The premise originally came from thinking about Pirate Ship, at a point when it was too late to change it. I realized that I could have made it that Pirate Ship either attacked or upgraded, and it upgraded into a Retired Pirate that made money. This change wouldn't have addressed any problems, it was just a cute thing I could have done, if I'd thought of it in time and had been willing to give up a card slot for it. So after that I planned on one day doing such cards. "If you didn't buy anything" was an obvious simple trigger, and a nice fit for a Hermit. If he doesn't go into town often enough, he goes mad.
—Donald X. Vaccarino, The Secret History of the Dark Ages Cards