Hero is an Action-Traveller from Adventures. It is a terminal silver that can gain any Treasure in the game. It is not in the Supply, but can be exchanged for from a Warrior

. Hero itself, once discarded from play, can be exchanged for a Champion

. There are only 5 copies of Hero in the Hero pile.

There is no strategy article for Hero, but the Page

Hero is not the most interesting card in the Page

family. It is usually played only once per player per game, because it's an essential step from Warrior

. After obtaining your Champion, other Travellers from the Page line should usually be kept as Warriors, as the extra draw is more than welcome after all the Treasure gaining. Also, opponents without a Champion might be afflicted by the Warrior's attack.

Since Hero can gain any Treasure in the game, it becomes a lot stronger on Colony

suddenly becomes an option. In these cases, you might want to get a Hero or two after all. Some other reasons to pursue Hero include strong (Engine-friendly) kingdom treasures, such as Horn of Plenty

. Hero is also able to gain a Philosopher's Stone

without first getting a Potion 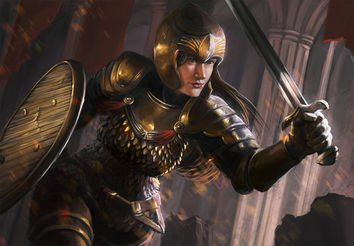 Finally we have Hero. This one is somewhat enigmatic. The top is straightforward, you get +

and gain a Treasure, any Treasure in the game. Usually Gold

but you never know, could be Platinum

or something more exotic. And then when you discard it from play, you can exchange it for a Champion. And wait, this isn't in the Supply. How do you get one? Well I'll tell you. You just need to discard a Warrior from play; then you can exchange the Warrior for a Hero. Warrior isn't in the Supply either though - you get one by exchanging a Treasure Hunter 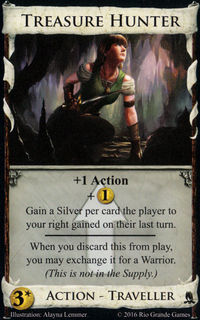 for it. I suppose it's obvious that you get a Treasure Hunter by exchanging a Page

for it. But that's it, that's all the turtles there are; you buy a Page, and it turns into a Treasure Hunter, then a Warrior, then a Hero, then a Champion. Page costs

, so the actual cost of Hero is,

, plus playing those other cards once each. I somehow fit two of these cycles into Adventures - there's also a Peasant

who becomes a Soldier

, but then a Fugitive

, but then a Disciple

, and finally a Teacher

. It's two little life stories, played out in cards that gradually get better for you. What exactly the other cards do will remain a mystery until the set is out; there is just too much to preview.
—Donald X. Vaccarino, Adventures Previews #1 - Lost City, Magpie, Hero

Hero was just a simple compelling thing I could do; various cards have tried non-limited "gain a treasure" and "gain an action" and well having to buy a Page