Hoard is a Treasure card from Prosperity. It is a gainer, since it allows you to gain Gold

cards without buying them, by buying a Victory card with Hoard in play. It can be a quick way to get lots of Gold cards, but be sure you have a way to deal with the Victory cards you pick up!

When Hoards are present, you may not need to buy Gold if you can just draw your Hoard often enough. And you really don’t need more than one or two; with Hoard, your deck will be quite a bit stronger than it usually is after the VP-buying starts. This means that with

, you can start buying Duchies much earlier than you normally would.

Hoard is most powerful with the mixed Victory cards (Great Hall

strategy, since picking up a couple Hoards before buying the Duchies and Dukes is usually enough to keep your deck producing

even after you saturate it with Victory cards. The same principle applies to Gardens

strategies, though you should keep in mind that most Gardens strategies depend on fast endings, and building up to

Hoard is also the rare card that benefits from a ton of extra Buys, especially with the Bridge

can turn this into a devastating combo: stack up on free Estates

, optionally trashing them as they come in, while top-decking your Golds. Add in an Herbalist

In general, if there isn’t another viable buy, then you should always try to use Hoard to buy a Victory card, even if that means buying an Estate or Duchy before your first Province

works very well with Hoard, since it gives you a +Buy for all those Golds, and Bishop

is almost as good. With a source of +Buy and +Actions, Apprentice

and Hoard can be used to create a devastating engine where Apprentice has a continuous supply of Golds (or even Duchies or Provinces) to trash to draw huge numbers of cards, many of which will be golds, leading to tremendous buying power.

[edit] When is Hoard not a good buy?

So when would you pass up Hoard for Gold? Well, Hoard naturally works very badly with Treasury

are available; cutting out the Hoard and bootstrapping from Gold to Platinum can get you to Colonies

faster, since it’s difficult to get to Colonies with just Hoarded Golds. And there’s not too much point to buying Hoards late in the game; for instance, if you have Royal Seal

or Watchtower, you might choose to buy and top-deck a late Gold rather than a Hoard, so that you can get to the last Province/Colony sooner.

Hoard also does not work well with thinned engine strategies that are choked by adding even high-value treasure. Engines based around Minion

, but it still can choke these engines, especially if Hoard is used to buy low-value VP like Estates. Care must be taken to keep the engine smooth and solid enough to continue drawing the deck. Trashing and buying Nobles

or even Great Hall

to activate the Hoard can minimize the negative impact on an engine. 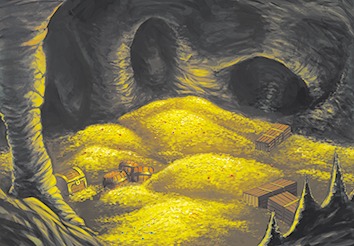 . It was too strong, although it took a long time to get changed.
—Donald X. Vaccarino, The Other Secret History of the Prosperity Cards