Humble Castle is a Treasure-Victory-Castle card from Empires. It's strictly worse than Silver

as a Treasure, but it gives the player a reason to go for Castles with its counting of them in

When it is first bought, it is technically equivalent to exactly half a Harem

in all respects: VP, coins, and cost. This of course ignores the game's actual economy (where both Copper

act as junk), and the actual investment is in the expected growth of its victory points. 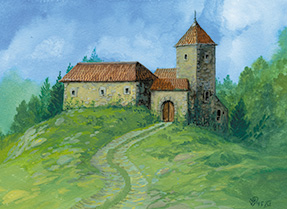 Hey, it’s a Victory card that counts other cards from its own pile! It’s rough to buy an early Copper

, but the potential reward in

is pretty hefty. As Donald says, buying a Humble Castle is throwing down the gauntlet; declaring your intention to pursue Castles this game.
—LastFootnote, Empires Bonus Preview #5: Castles