Ironworks is an Action card from Intrigue. It is a gainer which allows you to gain cheap (sub-

) Actions, Treasures, and Victory cards without buying them. Since it is nonterminal when gaining Action cards such as other Ironworks, it can enable lightning-fast rushes; it is also very convenient for picking up cheap engine pieces.

There is no strategy article currently written for Ironworks.

Ironworks is similar to Workshop

but is much more powerful in many situations. Because it gives a +Action when gaining actions, it is especially useful in building an engine. Ironworks is nearly always preferential to Workshop, the only small downside being that its higher cost makes it impossible to open double Ironworks.

. It is less useful on boards that require too many

. Not only does Ironworks aid the acquisition of key VP cards, but it helps to quickly end the game on emptying cheap piles.

, Ironworks is much more valuable on boards including these cards, especially on boards where these cards are desirable for other reasons, such as in the presence of Crossroads

can also be gained in the endgame to help achieve a lead or catch up when behind in Provinces.

, in part because both cards offer +1 Action. Ironworks can gain

-cost actions in quantity, which can be upgraded into key

-cost cards, or Duchies in the endgame. Remodel

can have a similar effect, but this typically requires Villages to play +Actions.

Ironworks can occasionally be useful to gain Silver

, although this use is less common. This use of Ironworks tends to be most beneficial on boards without a strong engine, such as Duke

strategies, but it can also be used if you reach

and need an extra

to buy a Province. 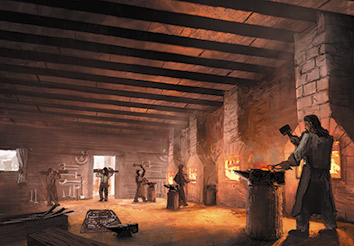 A somewhat late card, although still from prior to development. I designed it specifically to interact with the cards with two types. As it happens it only interacts with one such card in this set. But the card is cool anyway. Kelly was the one who suggested the template used to squeeze the text from this and Tribute onto the cards in a readable fashion.
—Donald X. Vaccarino, The Secret History of the Intrigue Cards