Laboratory is an Action card from the Base set. It increases your handsize by giving you +2 cards, and then gives +1 Action so you can keep playing more Actions. Cards from other expansions which increase your handsize and give +1 Action, like Hunting Party

The benchmark against which every other

card is measured. Laboratory was the first Dominion card released with such delicious self-synergy: unlike +Actions/+Cards engines, a Laboratory chain can’t sputter because it drew its cards in the wrong order. And there’s no fine-tuning selection of purchases needed, no need to balance between terminals and +Actions: just spam Lab over and over again. This makes Lab chains easier to run than a Village

chain, albeit a bit more expensive.

, Laboratory is one of the non-attack

. (Similarly, it’s also one of the cards that might make opening with Feast

worth it.) It’s not as important as City, Mountebank

, but you can quickly fall behind if you allow your opponent to grab all the Labs, even if you establish a counterbalancing Gold 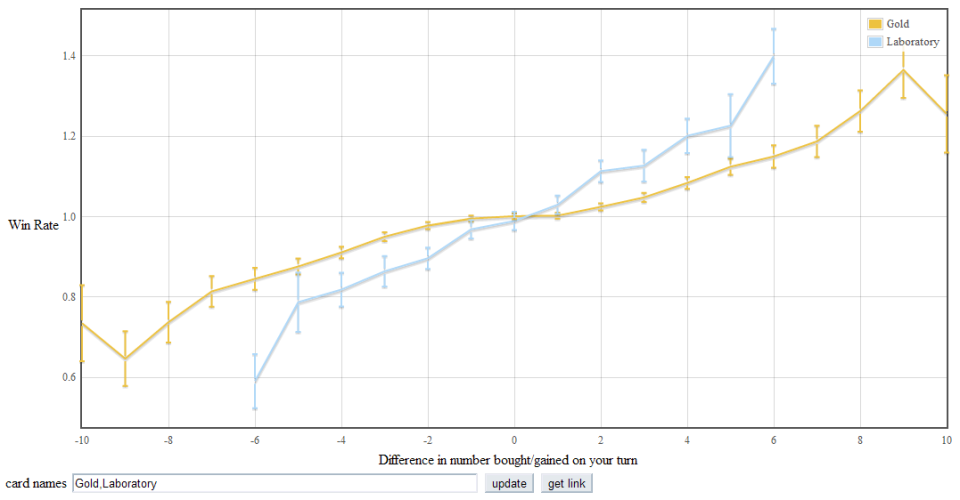 This isn't conclusive, but this graph from Councilroom.com indicates that you can't forsake Labs entirely to concentrate on Golds.

Laboratory is an excellent addition to just about any deck, since almost every deck benefits from increased handsize, and few other non-terminals instantly increase your handsize. But Laboratory is especially powerful in trimmed decks, because its value is entirely tied to your deck’s average card value. At the same time, Lab doesn’t actually improve your deck in a macro sense. It’s easy to get caught up in a Village Idiot situation, where despite being able to draw your deck, you have nothing worth drawing. So it’s important to balance your Lab buildup with actual deck improvement if you foresee being able to draw your deck.

In a high-powered Lab deck, you also need some source of +Buy. Ideally you’d pick up some kind of Market, to facilitate drawing more Labs and use your terminal on an attack instead, but if you see that you’ll be building a Lab chain, and there’s no non-terminal source of +Buy, you can get the need for +Buy out of the way with an early Woodcutter

If there isn’t +Buy, it’s important not to build too fine-tuned a deck. It’s no use spending time getting your Lab chain to consistently draw

if you can only buy one Province

at a time: you’ll likely fall too far behind an opponent whose deck only gets to

, but got there two turns sooner than you did. 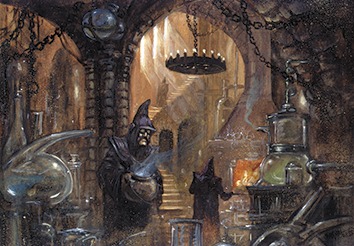 A very early card that looked like this for forever.
—Donald X. Vaccarino, The Secret History of the Dominion Cards