Legionary is an Action-Attack card from Empires. It is a source of virtual coin, and can be the most devastating handsize attack in the game, forcing opponents to discard down to 2 cards before drawing a random card from their deck, as long as the player is able to reveal a Gold

There is no strategy article for Legionary ... yet. Feel free to add your thoughts below! 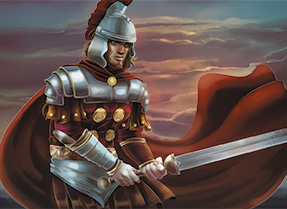 . So you got the full effect only if you played three Silvers. I quickly ran through a few variants before settling on, reveal a Gold to have them discard down to 2 then draw (an attack from Dark Ages that had been too annoying, but that one was cheaper and didn't require revealing a Gold). But then for a while it instead triggered on playing a Gold; for some reason I thought that might be better. It wasn't and it's back to revealing a Gold.
—Donald X. Vaccarino, The Secret History of the Empires Cards