is an Action card from Seaside. When you play Lookout, you look at the top 3 cards of your deck and pick one to trash, one to discard, and one to put back; unless you know what's on top of your deck, look out, because you might have to trash something you'd rather keep! Nevertheless, as a non-terminal trasher, Lookout can be a pretty good opening when the Kingdom is right.

There is no comprehensive strategy article for Lookout.

Lookout is one of the few non-terminal trashers in the game. However, only trashing a single card and the typical unpredictability in which card is trashed weakens Lookout a lot. Furthermore, the forced trashing, coupled with the uncertainty in what you draw, can often make Lookout a dangerous play, especially towards the end of the game. Ideally, in games where you pick up a Lookout, you should keep track of what cards are remaining in your deck and not play Lookout if there is a good chance of a bad draw.

Lookout becomes much stronger when you can negate the unpredictability. If either you or your opponent plays a card which allows you to know what is coming up next, it allows you to much more safely play Lookout. Lookout is a particularly effective defense against Sea Hag

, which places the curse on top of your deck.

Because Lookout takes up a slot in your hand, it is often counter-productive in a Big Money deck. The lost buying power will slow you down from purchasing Gold 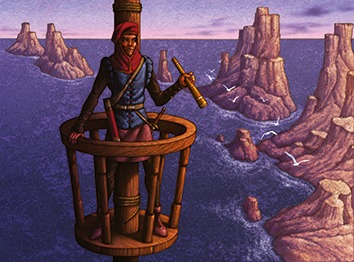 A late replacement for a one-shot Chapel variant that didn't work out. It seems cute to have a Chapel that doesn't stay in your deck, but the card as it stood was both really unsexy and also too powerful. It had to get sexier while at the same time getting worse. That's not so easy. A better solution was to just replace it, which is what happened. Lookout started out putting one card into your hand rather than having you discard one. That was just insane, and it quickly got cut down to size.
—Donald X. Vaccarino, The Secret History of the Seaside Cards

Lookout is the dud of the set. The problem is, some people are terrified of trashing a good card with it. At the same time trashing bad cards looks less exciting to some players. And as a trasher it's not exceptional. So the overall package is a card that a lot of players don't want, but that some experienced players realize is okay but not special. I could instead have some other card more people liked.
—Donald X. Vaccarino, What Donald X. Might Do With a Dominion Time Machine