Former Did You Know 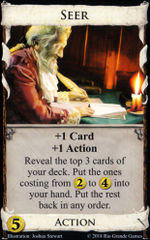 At first Seer got you cards costing 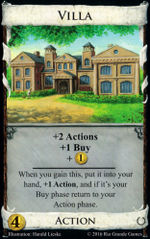 Originally Villa just gave +1 Buy when you bought it. One day I thought of having a card that let you play an Action when you bought it, and after a few quick iterations it landed here, as the Village you buy to help out that same turn. For a while it was played when you bought it, but that has some tricky interactions, which were resolved by putting it into your hand instead, and giving you +1 Action to play it with.
—Donald X. Vaccarino, The Secret History of the Empires Cards 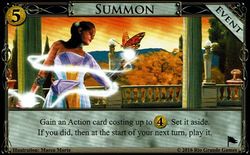 Altenburger, the German publisher, wanted a promo. I said, how about an Event? They said great. The Event actually promotes Adventures, the set with Events. A first for our promos.

Playtester Matt Engel, aka LastFootnote, is a big designer of homemade cards. I said, do you want to make this promo? He said meh. A bad day. He did end up making Summon and trying to sell me on its virtues. It all worked out.
—Donald X. Vaccarino, 'The Secret History of the Dominion Promos'

Lost Arts was initially a one-shot Kingdom card. An early star of the set. Initially the tokens weren't counter-limited; you could get multiple +1 Action tokens and +

cost tokens. I lowered it down to just two and then just one. You get the experience with one and I don't need to cost the cards for crazier situations.
—Donald X. Vaccarino, The Secret History of Dominion: Adventures

What about a Duration card that never goes away? I playtested a version of Hireling in Alchemy. It seemed fine but needed a playmat so it didn't happen (I did Alchemist

Swamp Hag was one of the first cards in Adventures. The attack was always the same, except for precise phrasing vs. things like Outpost

Giant came about because I wanted a card called Giant. Some kind of slow attack. I already had the Journey token so I used it to make an attack that only hits every other time. At first it didn't do anything on the face down turn, but I eventually nudged it up. Giants don't have a flavor tie-in with Curses

Caravan Guard came out of looking specifically to see if I'd missed some corner of possibilities for Durations. This is a Duration that's a round faster if you get attacked. The phrasing was an issue; what if you play it on someone else's turn and have a +

Royal Carriage was a Dark Ages outtake. We always liked it, but it needed a mat. It has a mat here and well that's pretty much the story. I briefly had a bad wording that could let you go infinite, and fixing it made it even more like the Dark Ages version.
—Donald X. Vaccarino, The Secret History of Dominion: Adventures

Adventures, the newest expansion for Dominion, releases this month! Head over to the forums to check out the cards that have been previewed so far, and stay tuned here as more information is revealed!

from Alchemy, where it originally cost

. I wanted something else really simple and classic-seeming. It had been a good fit for Alchemy, since it counts Potions even if you don't end up spending them. Alchemy was years off though, years I say, and Prosperity needed a card now. Then when Alchemy got bumped up, I didn't steal this card back, because it required a little more of the Prosperity rules than I was comfortable with putting out ahead of Prosperity.
—Donald X. Vaccarino, The Other Secret History of the Prosperity Cards

For a long time, Caravan actually set a card aside when playing it, and then drew that card next turn. That way was a little more flavorful, but the published version is slightly simpler.
—Donald X. Vaccarino, The Secret History of the Seaside Cards

Originally Farmland triggered on gaining it. This can cause some confusing chaining - buy Farmland, trash a card costing

, gain a Farmland. I might have left it as when-gain anyway, just to have everything be when-gain (possibly also limiting what you could gain to non-Farmland), but Noble Brigand

had to be when-buy, so there wasn't a sufficient benefit to having this be when-gain. So the less confusing when-buy prevailed.
—Donald X. Vaccarino, The Secret History of the Hinterlands Cards

Merchant Guild started out thinking it could cost

Jay wanted a Dominion promo sometime. No rush. I eventually got around to it. I wanted something that felt like a promo; something exotic. I tried out a few ideas I had in the file; Prince, the one that played a card every turn, was easily the highlight. So I worked on that one. It was an old idea, predating the original game being published. Back then I had decided maybe I would someday do it as a unique card, to get around the issue of using Prince on Prince; then I made unique cards for Tournament but didn't do it there. There were other ways to solve the problems though; as usual it just took lots of tiny text.
—Donald X. Vaccarino, The Secret History of the Dominion Promos

I tried out a Throne

for treasures in Prosperity. It seemed like a classic thing, but it wasn't as popular as I'd hoped, so I dropped it. I rescued it here as Counterfeit by having it trash the treasure you Throne, which makes it double as a way to get rid of Coppers, and hey I threw in +

Masquerade debuted in the 3rd set, moved to the 5th set, and finally ended up here. I wanted another interactive card and Dale wanted another card that cost

Originally the main set had a different special victory card. I swapped this in, taking it from the 6th expansion, because this one was less narrow - there are more "tables" (sets of 10 kingdom cards) that make Gardens

a viable strategy. At one point Valerie put this on a list of cards she thought could leave the main set, but I defended it and she didn't fight it.

is the only card that Valerie and Dale changed (other than non-functional wording changes). Which is of course just the way I would have wanted things - I mean who wouldn't? They had no compulsion to make changes for the sake of changing things; they complained about a few weak/confusing cards that just left, and everything else but Thief ended up the way I made it. Anyway Thief originally revealed the top 2 cards, then put the untrashed ones back. Valerie didn't like how, if you got hit with Thief and your top 2 cards were non-Treasures, then subsequent Thieves would also get nothing. Also there was the issue of remembering the order to put the cards back. So they changed it from reveal to reveal-then-discard. I was initially skeptical but in the end I think it was a good change.

started out with a mere "+1 Buy" on that first evening of Dominion, and gradually accumulated the rest of the +'s over a couple evenings. If I left it at that you might think the first version was cheaper than

. Before playing that first game, I had no idea what card costs should be, and my guesses were not always in the ballpark. Drawing Market meant you had fewer cards in hand to actually spend on that buy, so it obviously needed some money to go with it; and then there was another card that gave you a free coin, and I merged them.

In the very first game of Dominion, Witch

cost 3 but didn't draw you cards. It quickly shot up to 5, then gained the penalty of "pay one coin." That's how much people hated Witch. It stayed like that until around when development started. When I started doing more testing of the main set cards (as opposed to expansions), it was obvious that Witch was weak. First it lost the penalty, then gained +1 Card, then +2 Cards. It costs 5; there is some tough competition there.