Mandarin is an Action card from Hinterlands. Mandarin gives +

and requires you to place a card on top of your deck, which can be a benefit or a detriment depending on the situation. Likewise, the on-gain effect of placing all Treasures on your deck may or may not be helpful. As such, Mandarin is a very situational card. The on gain effect also allows for potentially unique openings, as you can get numerous Mandarins and another

card before the first shuffle.

Mandarin isn't a great card. But it's not so bad either. It's just highly situational. Saving a card for next turn might be helpful, but it slows down your deck cycling on average, which is bad in the early game. And the on-gain effect really slows down your deck. Still, the ability can be useful. You might consider buying a Mandarin if it makes it likely to get a Gold or Province next turn, depending on the stage of the game. And in strong engines that only need a card or two to kick off, Mandarin can really give you some consistency.

Openings: It's often tempting to look at the strange potential openings you can create with Mandarin. However, a

opening is often weaker than it seems at first. This is because it's not much different than opening

opening, if we're counting the third turn. There are a few very strong

Finally, there is one other trick which can be performed with Mandarin and Horn of Plenty

. With a hand of Copper

, you can play the

and use the Horn of Plenty to gain a Mandarin. All 5 treasures will be placed on top of your deck and you'll still have

to buy a Colony. You can repeat this as long as there are Mandarins left in the supply. This also works with replacing the Platinum with any treasure which produces at least

allowing you to gain a Province every turn. 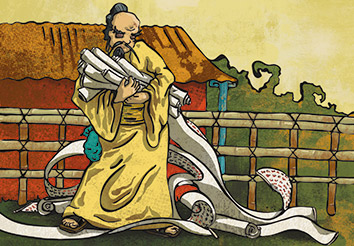 Mandarin puts all of your played Treasures back on your deck when you gain it. It's pretty cute when those Treasures are five Coppers

, such as on turn one with a

opening. You buy Mandarin, put the Coppers on your deck, draw your new hand... of five Coppers. Enough for a Mandarin! Just how many Mandarins did you want, anyway? It all depends, but I am betting, not all of them.

, keeping any superfluous Copper in hand; buy a Mandarin, see if you do better next turn. And there are tricks it can do with special Treasures.

When you play Mandarin, you get +

. It costs a lot more than Courtyard and well there's a lesson there for all of us.
—Donald X. Vaccarino, Hinterlands Previews #3

The top was an obvious simple thing I just hadn't done yet. I tried several different bottoms before settling on this one. One version around for a while put a card from play on top of your deck when you gained it. That has issues that Scheme cleverly resolved but I didn't want to propagate that wordiness.
—Donald X. Vaccarino, The Secret History of the Hinterlands Cards