Margrave is an Action–Attack from Hinterlands. Margrave's attack generally hurts your opponents less than other discard attacks, and subsequent plays actually help them. However, +3 Cards and +Buy are very nice benefits for both Big Money and engines when played in moderation.

Margrave is a great card for Big Money decks. It combines the general speed of Smithy's card draw, the attack of Militia

(almost), oh and it throws in a +buy just in case you need it. It's generally OK to over-invest in Margrave a little bit, especially if your opponent also buys them. You could certainly buy 3, maybe 4, where you'd only want 1 to 2 Smithies

, as hitting with the attack becomes a bit more important than the chance of terminal collision.

In engines, Margrave is a trickier beast. Generally the first Margrave will hurt the opponent, but repeated plays of the card can only help, especially if only 3 cards are needed to really kick off an engine. If Margrave is the only card draw, then you likely just have to realize the attack won't do much. But if you can find card draw elsewhere, adding just one or two Margraves for the buy and attack is likely the best move. 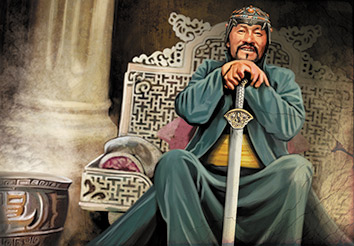 A later set for a long time had an attack that made everyone else discard down to two, then draw a card. Mathematically it seems equivalent to Militia: you discard down to three, then you discard the worst card, which on average is average for your deck, being the middle card out of five; then you draw a card, which on average is average for your deck. That math is tricky but run through it a couple times if you have to. It's the same as Militia. Well in practice it hurts way more than Militia, like you might have thought. Militia lets you keep three cards that could be a fine hand. This only let you keep two, which is rarely enough to have a good plan, and then you draw a random card, which could work out but often does not. Anyway it was around for a long time but eventually died and everyone rejoiced. Vinay Baliga suggested flipping it - they draw one then discard down to three. Sounded good, I tried it, it worked out, there it is.
—Donald X. Vaccarino, The Secret History of the Hinterlands Cards