Masquerade is an Action card from Intrigue, and the only card that allows cards to be passed directly from one player's hand to another's. It is both terminal card draw and a trasher, since it provides +Cards, no +Action, and lets you trash a card. It is a powerful opener since it allows you to trash cards while still having a 5-card hand to buy cards with. Masquerade is a powerful counter to many cursers since it can pass Curses

back to the opponent; it can also be used to steal good cards.

In the first edition of Intrigue, Masquerade did not make an exception for players with no cards in hand—such a player would receive a card but be unable to pass one, and so the player to their left would pass a card but not receive one. As a result of this, it was sometimes possible to set up pins with Masquerade where one player would repeatedly have to pass cards without receiving them, until they were left with no cards in hand on their turn, and over the course of several turns be forced to pass their entire deck away. The card was revised in the second edition to eliminate this possibility.

Original article by jonts26, incorporating analysis from DG and jomini, edited by theory.

Masquerade is one of the strongest cards in the game. In fact, in the most recent Top 5

List of Cards by Qvist Rankings it is ranked #2. It took a while for the community to grow to appreciate the strength of this card: people are typically drawn to the card by the neat passing mechanic. However, for most games, the passing mechanic is the least important aspect of the card. In fact, if you had a card which just offered +2 Cards and the ability to trash a card, it would be just as strong for many games. But the ability to pass adds on a lot of very fun interactions and the occasional situation when the correct pass means the difference between winning or losing.

As far as playing “Big Money” goes, Masquerade is near the top tier of non-attack enablers. Not much can dethrone Wharf

from the top tier, but Masquerade is only a notch below. The reason is that it combines both card draw and trashing: on their own, each of those abilities is fairly weak, but the combination of the two is what gives Masquerade such strength.

Let me explain. First, trashers are normally poor Big Money enablers because it leaves you with a gimped early game hand. (I Chapel

and buy nothing.) But with Masquerade, you can simultaneously thin your deck and still have enough buying power to be improving your deck with Silvers

actions. In addition, the +2 Cards greatly improves cycling, allowing the card to come back into your deck faster. Finally, the +2 Cards means you’ll often be able to find something worth trashing (since you’re searching through 6 cards instead of 4).

Since Estate trashing is so much more desirable than Copper trashing for Big Money games, you likely won’t need a second Masquerade. But you should definitely add another strong terminal into your deck: since Masq only draws two cards, collisions are more unlikely than if you were playing another terminal draw card like Smithy. Often in money games with another strong Big Money enabler, the correct move is to get both, and the Masquerade first.

Cursing attacks in particular tend to dominate money games. Masquerade counters them harder than most, so the best move is typically to open Masquerade and transition into your curser. The exception being Sea Hag

, which is simply crushed under Masquerade’s weight. The combination of no early game economy and the decent chance that the Curse

comes right back to you simply gives the Hag no chance. Familiar is also not very good: it’s a curser that takes some time to set up, so it gets crushed by Masquerade’s speed. Masquerade can also handle Torturer

(take the Curse and give it right back), but a very strong Torturer chain is one of those attacks even Masquerade can’t handle.

One final point, and this is particularly true with Masquerade/Money mirrors, or games with only one Buy, is that keeping an Estate for yourself (either by refusing to pass it or just refusing to trash it) can give you a huge advantage in the end game. You only need to win by 1 point. Certainly in the early game you want to aggressively remove Estates but as the game wears on, it is often to your advantage to leave yourself one Estate.

While Masquerade shines in Big Money games, it is darned good in engine games too. Again, it’s not the best card draw, and it’s not the best trasher, but it does both. And the thinner your deck gets, the more often Masquerade gets played, giving you good deck acceleration. Masquerade is particularly strong as an opening when there are strong

engine cards you want like Wharf and Bazaar. While Masq/Silver opening makes it difficult to see

for a little while,

But the card is a double edged sword in these games. As you thin and improve your deck, you start running the risk of having a great hand, only to have a Masquerade played on you. So in any engine game that involves Masquerade, do not over-trash your junk. Trash just enough so that you are likely to still have a card to pass on an opponent’s Masquerade while still being able to fire your engine reliably. Easier said than done.

are present, you’ll often have to keep a junk card in hand when Militia is played to guard against Masquerade. So Militia ends up hurting even more than usual.

Moreover, you can play mindgames with your opponent with Bishop

(cards that give optional benefits to your opponent). With a hand of Gold-Silver-Silver-Curse-Province, for instance, do I discard to your Vault and hope you don’t Masquerade me? Do I trash my Curse on your Bishop or hope to be able to pass it to you?

More advanced is being able to manipulate what your opponent passes to you. Rabble

is a great way of doing this: in the late game, Rabble can often set up massive stacks of valuable green cards ready to be Masqueraded on the next turn (or even worse, play Village

, et al. if top-decked too aggressively will force you to pass good cards more often.

The way Masquerade works in a multiplayer game is nearly too complex to describe, what with its interactions with Torturer

. The key things to remember are:

Possession is not an attack. This is because your opponent cannot actually hurt your current hand or deck at large with it. Except, of course, when Masquerade or Ambassador

is on the board. Passing is not trashing and it’s not gaining. So any cards you pass while Possessed remain passed. Now, Masquerade/Big Money is fast, and if there is no good engine, it’s unlikely that your opponent is able to buy Possession, play it, and pass enough points to himself before you can drain Provinces.

But if there is an engine, or a fast route to Possession, then buying Masquerade is very dangerous unless there is a good way to trash away your Masquerade fairly quickly. Except, well, Masquerade might be the card you need to really ramp up your engine and there might be no other trashing. Then what? Well, buy a Masquerade anyway, and hope the shuffle luck fairy is on your side. You need Masquerade to get to the Possession faster, but you better hope you don’t have it in hand when your opponent plays his Possession! And if your opponent stays away from Masquerade or trashes it by the time you grab your Possession, buy a second Masquerade and pass it over to him. This is not a good way to make friends.

Prior to the new second edition wording, it was possible to create a situation where you resolved Masquerade with no cards in your hand, forcing the opponent to give you a card while not getting anything back, and allowing you to trash them as they came in so as to effectively slowly trash all the cards in your opponent's deck. Now that you must pass a card to receive a card, the pin potentials are vastly reduced, although still possible. Now you must rely on attacks that require the opponent to have a specific card in their hand, and that forces the card to leave their hand. These are, in order of ease to set up, Cutpurse, Taxman, and Bureaucrat. These all come with the down side of you needing to supply the cards that your opponent will be discarding or topdecking, and in the case of Taxman another copy of it to trash. Cutpurse is the easiest to manage: you only need a few extra buys to buy back the copper, and there is enough copper in the supply to keep the pin going quite a while even if they don't pass you copper back - not to mention that if you keep the pin up long enough they'll soon be forced to since their deck will become flooded with copper. Taxman you can gain the copper you trashed back, but this cuts into the supply as one copper ends up trashed each play, providing a limitation on how long the pin can stay up. With Bureaucrat, you have silver flooding your engine and you need to spend coins on any victory cards they don't pass back to you. 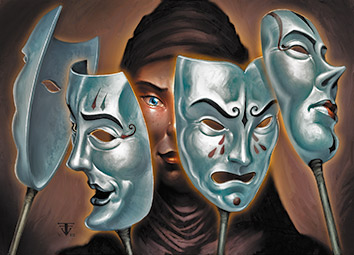 This card debuted in the 3rd set, moved to the 5th set, and finally ended up here. I wanted another interactive card and Dale wanted another card that cost

Masquerade originally triggered gain/trash things; I would look at that again, but honestly I would be unlikely to just reword it to address the King's Court

combo. Masquerade has a clear simple wording and I would rather kill the card than make the wording awful, an awful that you dear reader may be mystified as to the awfulness of, I have come to terms with that. But I'm not sure I need to kill the combo and Masquerade is a pretty cool card.
—Donald X. Vaccarino, What Donald X. Might Do With a Dominion Time Machine