Militia is an Action and Attack card from the Base set. It is the first handsize attack that most players encounter when learning Dominion, making opponents discard down to three cards in hand. It is also a terminal silver, meaning that it gives +

Though it is outclassed by other handsize attacks such as Goons

from Prosperity, it remains a useful card to add to many decks, slowing down opponents while giving you

to spend. It can be countered by draw-up-to-X cards like Library

There is no strategy article written for Militia.

Militia is a fairly basic and pretty good discard attack. It can be effective at slowing down the opponent early, and an engine which plays Militia every turn will greatly slow down a Big Money strategy. It's also a good counter to strategies that rely on sifting from Warehouse

, and it's good against Vault

decks. With no support, Militia does not beat terminal draw as a Big Money enabler, but is often a good addition to an engine.

On boards where there is no counter to Militia and both players buy it, the game can take markedly longer. Militia also slightly reduces the benefit of trashing weak cards like Estates

When is militia strongest?

Militia tends to have a stronger effect against a heavily-thinned deck, as these decks have more consistent value and less junk to discard. Trashers typically come with an opportunity cost, so a deck that relies on trashing tends to go through a period where it has forgone stronger cards in the short-term, for more benefits long-term.

Like other discard attacks, Militia is stronger against decks that contain a lot of cantrips. Because a player does not know what cards will be drawn, cantrips increase the likelihood of making a sub-optimal choice of which cards to discard.

Militia is also markedly more powerful against decks that have a relatively homogeneous composition, as opposed to decks with cards of disparate play value, because decks with a few strong cards mixed in with weaker cards can discard the weaker cards, losing less value.

. These decks fill up with victory cards quickly, and have lots of cards that can be discarded without loss. In a more typical deck, assuming there is no strong counter, Militia tends to hit hardest mid-game when players' decks have reached a consistently high value, but before greening. 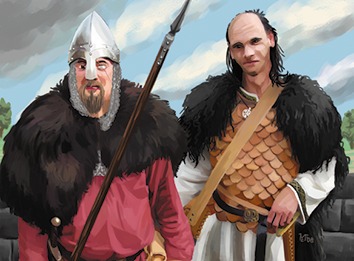 I already told the story of this one under Bureaucrat

. If you skipped ahead to get to the Militia story, go back.
—Donald X. Vaccarino, The Secret History of the Dominion Cards