Mill is an Action–Victory card from the second edition of Intrigue. It is a cantrip that allows you to discard for money, and is also worth 1

When new players first encounter Mill, they will often exclaim "That's a good card." At first glance, it seems to be powerful because it does a little bit of everything -- it's a cantrip, it generates buying power, and it's an extra victory point. In reality, Mill can best be summarized like Earth in The Hitchhiker's Guide to the Galaxy: Mostly harmless. It can be added to pretty much any deck without making the deck worse, though the situations in which it is a genuinely strong addition to a deck are fairly narrow.

When there are cursers or junkers on the board, trashing is a much stronger choice than Mill or any other discard-for-benefit card. What about on boards without good trashers? Here the dominant strategy is often to deal junk sooner and more often than your opponents, rather than relying on Mill to counteract junk as it gets added to your deck. If the game is heading towards a slog, you want more junk to end up in your opponent's deck than in yours.

Mill's value improves once the curse pile is depleted. When this happens, the cursers become mostly dead cards, and there is likely to be a high volume of curses in each deck, resulting in a good chance of drawing Mill with at least two dead cards. The same is also true in games with longer greening phases, such as Gardens

games or when Duchy dancing has weakened both decks.

Mill is perhaps at its worst in a Big Money game. With an early Mill purchase, the best case scenario is drawing it with two Estate

s, but this is fairly unlikely and continues to become more unlikely as the deck gets larger. Milling away one Estate and one Copper is not worth the investment of

is almost always a stronger choice, especially with terminal draw actions in the deck.

The exception to the above is "draw-to-X" cards, like Watchtower

. With these actions available, Milling away two Coppers for +

is a strong play, as it increases the number of cards that the draw-to-X action will produce. For example, if the hand is Library/Mill/Copper/Copper/Copper, Mill picks up one card, discards two Coppers for +

essentially guarantees the player will reach crucial price points, such as

decks and Double Tactician decks. If these strategies are employed on a board without good trashing, Mill can be an important tool for cycling cards and generating value out of treasures that would otherwise be useless.

In a typical engine deck, action cards in hand are more valuable than the +

that would be generated by discarding them. This is especially true on a board with strong trashing, but is often true even on a board with no trashing. There is also the question of opportunity cost: When adding a card to an engine deck, it should either contribute in some meaningful way to the engine's capabilities, or improve the likelihood of buying more expensive engine components, or preferably both. There are many

-cost cards that perform better at both of these tasks than Mill.

One exception is when the player can consistently draw their entire deck each turn. In such a deck, it is sometimes possible to Mill away action cards for +

, then draw those action cards later in the same turn. As the engine slows down due to greening, Mill can shift its focus to discarding victory cards instead of actions. So while Mill may not be the strongest

-cost card available for such a deck, it will continue to be useful throughout the course of the game, whereas other actions may outlive their usefulness.

, with perhaps the most noteworthy being its interaction with Ironworks

. Some synergies that are unique to Mill include: 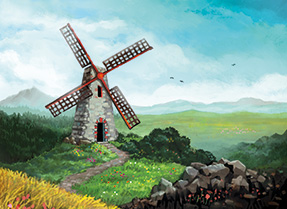 This of course replaces Great Hall

. It's a Great Hall that does something. And that something also replaces Secret Chamber

. Originally it was the same - discard X cards for +

- but the tracking is simpler if the amount is always

). I first tried it without the

, before realizing it was a good candidate for the new Great Hall.
—Donald X. Vaccarino, The Secret History of the Dominion 2nd Editions