Moneylender is an Action card from the Base set. When played, it lets you trash a Copper

from your hand and gives you +

if you do. It is similar to terminal Silvers, since it gives you 2 more

than you would have had from just playing the Copper; however, it also gets the Coppers out of your deck so you can draw your better cards more often.

In the first edition of Dominion, Moneylender's text did not include "you may": trashing a Copper was mandatory if Moneylender was played. Donald X. Vaccarino revised the card because that offered no provision for keeping the player honest: if a player claimed that they had no Coppers in hand, and that was why they weren't activating Moneylender's ability, there was no way for their opponents to verify that this was the case. This rarely made a difference in gameplay -- if a player didn't want to trash a Copper, they simply refrained from playing Moneylender.

A long time ago, this used to be one of the best opening

, it trashes without sacrificing your current hand. Moneylender even works with Chapel

: Moneylender can bootstrap Chapel decks into

as quickly as a Silver

while thinning the deck faster, and if there are no worthwhile

′s, then drawing Silver/Chapel is just as useless as drawing Moneylender/Chapel.

Unfortunately, there’s not much use for Moneylender outside the early game. Look for a way to get rid of it, even before it trashes all 7 Coppers; you’re just not as likely to draw it with your Coppers after three or four trashings. In the midgame, if you can draw your entire deck, then Moneylender can be a decent defense against Mountebank

. And if you feel especially daring, it might be worthwhile to spend some extra Buys on Coppers if you have excess card-drawing capacity, or if you're running a treasureless double-Tactician deck. More often, though, the Moneylender just ends up getting fed to the Salvager

, or even the Chapel 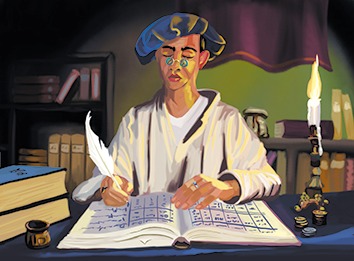 An old card that I don't think ever changed.
—Donald X. Vaccarino, The Secret History of the Dominion Cards

Moneylender should of course say "you may."
—Donald X. Vaccarino, What Donald X. Might Do With a Dominion Time Machine