Mountebank is an Action–Attack card from Prosperity. It is considered one of the strongest cursers because it can hand out two junk cards per play—both a Curse

and an (only slightly less undesirable) Copper

—thus rapidly weakening engines that depend on deck-thinning and fast cycling. Because it also distributes Coppers, unlike other cursers such as Witch

, it can remain an effective attack even after the Curses are depleted. However, it can be more luck-dependent than Witch, and it is less effective against players who have already been hit by it a few times, since an opponent who already has a Curse in hand may discard it to avoid the junk-distribution effects of Mountebank.

Mountebank is a very powerful card. It's slightly weaker than Witch

in a head-to-head Big Money game because the Curses

from Mountebank can be blocked and because Copper

does not hurt Big Money that much, but Mountebank is far more devastating to engines because it gives out two junk cards at once. The presence of Mountebank on the board makes some engine-based strategies less attractive, especially in the absence of counters or strong trashers.

. It also, however, makes it more of a swingy card. This has several interesting effects and interactions. A

opening is not quite as an overwhelming advantage with Mountebank as with Witch, although it still provides an advantage--this is because a lead in cursing is more likely to equalize after both players get Mountebanks and play them slightly.

Curses tend to run out more slowly in Mountebank games, and—except in 4-player games, where there may be roughly the same number of Coppers as Curses in the supply—the Coppers generally do not run out. This makes Mountebank keep its attack power longer than other cursers. It also leads to an interesting dilemma when trashing cards, especially early in the game. Trashing a Curse may make one more vulnerable to future Mountebank attacks, and it is often preferable to trash an Estate

or even a Copper in these situations. A thinned deck that consistently draws one Curse can actually protect against Mountebank, so if trying to build an engine against the attacks of an opponents' Mountebank, trashing Coppers and Estates is an even better choice.

Because the Curse must be discarded to block the attack, it can be advantageous to play multiple Mountebanks per turn. It is generally stronger to play two Mountebanks in one turn than to play them on two separate turns, but this may not be the best strategy on most boards.

Mountebank is not usually thought of as a discard attack, but the fact that you have to discard to block the Curse-and-Copper gaining can still hurt. Cards that are weakened by small handsize, such as Cellar

, can therefore be weakened by Mountebank; and you'll often find yourself planning to Upgrade

your Curse only to find yourself discarding it instead so you don't get junked up even worse. By the same token, though, Library

is slightly more useful against Mountebank than against, say, Witch

. There are a few cases where it might be advantageous to decide to gain the Curse and Copper rather than discarding, but such cases are much rarer than they are against Torturer

—for instance, when you hold Vault

, Curse, and two other cards, hanging onto the Curse in hand will guarantee you a Province

next turn. Once the Curses are depleted, however, it can often be a better choice to gain the Copper and keep the Curse in hand so that you can discard it for benefit or trash it on your turn.

, where there is typically no downside to trashing a curse. Although trashing a curse can still be beneficial, it makes one vulnerable to future attacks, including coppers after the curses run out. For optimal strategy, one must factor this into the decision of whether or not to put resources into trashing curses; Mountebank often makes it more worthwhile to sift through curses, rather than discard them. This is especially true in the presence of cards able to benefit by discarding a card, from sifters like Cellar 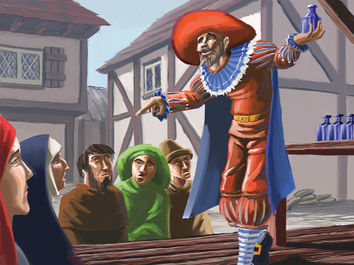 Mountebank was originally called Villain, then Trickster. The Germans said, could you rename that? As they'd already used Trickster for Swindler.
—Donald X. Vaccarino, from the forums

Originally it had the Mint

"penalty" and no discarding clause. It was too powerful and left the set. Later I brought it back without the "penalty" (yes it is not really a penalty), then added the Curse-Moating. Briefly you just revealed the Curse (rather than discard it), but I decided that was more hosing than I wanted.
—Donald X. Vaccarino, The Other Secret History of the Prosperity Cards