Necromancer is an Action card from Nocturne. It allows you to play Actions that are in the trash. Handily enough, three Actions (the Zombies) are added to the trash for Necromancer to work with when he's in the game. Choose carefully: if you play multiple Necromancers in one turn, you have to choose a different trashed Action each time. 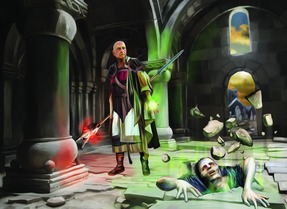 Finally, the powers of the dead are yours to command. It’s about time. Today I’m doing the last bonus preview, Necromancer. 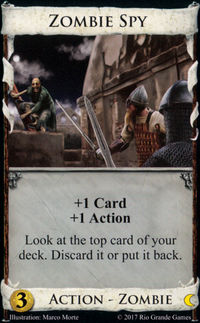 , the next could play Zombie Apprentice 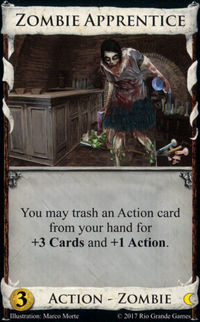 to trash a Skulk 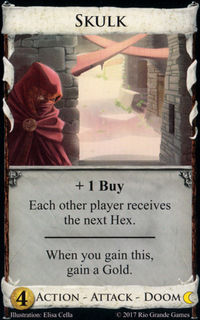 , and the last could play the Skulk you just trashed. If you use Throne Room to play Necromancer twice, each play of Necromancer will have to play a different card from the trash. Necromancer can’t play Duration cards, and cards that try to move themselves (like Reserve cards from Adventures) fail to do so; they’re stuck in the trash.
—LastFootnote, Nocturne Bonus Preview #5: Necromancer

This card came from the name. I had a list of names that fit the flavor of the set, and in some conversation thought, hey Necromancer could play cards from the trash. For a while it was a Band of Misfits

, it became the card. You played it as something in the trash. That was way more confusing but seemed the only way to do it. And it had this looming problem of how best to stop infinite loops, plus sometimes a tracking issue (how many of these did I play as Markets?). Matt suggested turning the cards in the trash face down for the turn to both track what you'd done and stop infinite loops; this solved those problems, but also turned out to open the door to changing it to play the cards outright, rather than being Band of Misfits. This fixes some poor rules situations and also has better flavor; it plays the Zombies, it doesn't become a Zombie. Not working on Duration cards was a late change; there's no tracking there, which is awful.
—Donald X. Vaccarino, The Secret History of Dominion: Nocturne