Night Watchman is a Night card from Nocturne. It's a sifting deck inspector that is gained to your hand for immediate use.

There is no strategy article for Night Watchman yet. Feel free to add your thoughts below!

Nocturne has a habit of turning classic Actions from the Base set into Night-Duration cards. Village 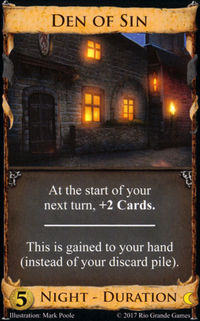 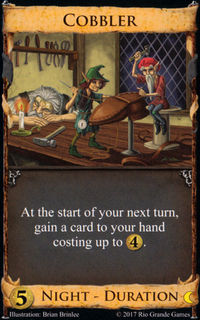 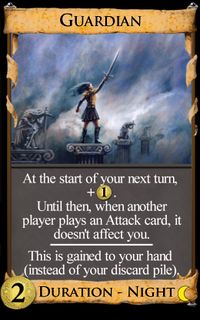 becomes Night Watchman. What differentiates these Night-Duration cards from the base Actions enough to justify their inclusion in the expansion? In particular, what is special about Night Watchman to justify its rank among the

-cost cards, while Cellar only costs

At first glance, the connection between Cellar and Night Watchman may not be very clear. It may also seem odd that Night Watchman has been grouped with the Night-Duration cards, as it lacks the Duration type. Consider this alternate description of Night Watchman's effect:

At the start of your next turn, discard any number of cards, then draw that many. This card is gained to your hand (instead of your discard pile).
—Night Watchman, Night-Duration

That description and Night Watchman's actual text would have almost identical effects, excluding interactions with other cards that alter your hand size at the beginning of your turn (such as Den of Sin

or an opponent's Militia

). In most cases, the removal of the Duration type is a huge improvement, but more on that later.

The key is that you are sacrificing power on your current turn to gain a bonus on your next turn. Having Cellar in your hand of 5 cards will result in a (hopefully) better hand of 4 cards. Meanwhile, having a Night Watchman in your hand leaves you with only your 4 other cards to play on your current turn, but gives you a better hand of 5 (not 4) cards on your next turn. This is a continuation of the guiding principle of Action-Duration cards such as Tactician

introduced in Seaside: "It is often better to have one great turn and one bad turn instead of two mediocre turns."

opening. On your 1st turn, you can use 3 of your 4 Coppers to buy a Silver

(Yes you read that right; just be patient). On your 2nd turn use your 3 Coppers to buy a Night Watchman, gaining it to your hand, and playing it. Your deck is currently empty, so you shuffle your Estate, Silver, and 4 Coppers to form a new deck, then look at the top 5 cards. If the Estate is among them, discard it; otherwise, don't discard anything. Either way, you have guaranteed

purchasing power on your 3rd turn, effectively turning your

. The combo can be made even better by replacing the Silver with a terminal silver Action card if one is available in the game's Supply, providing an additional effect on your 3rd turn, and potentially making use of the full

from the first turn. The best part is that all your gained cards get shuffled into your deck at the end of your 3rd turn, something that normally doesn't happen again until after the 4th turn. Your opponent that got the "lucky"

opening will be so jealous!

The combo doesn't work quite as well on a

opening. By using the Night Watchman to discard the Estates, only 33% of the time your 3rd turn will provide

, while there is a 67% chance that you will only have

, which still isn't too shabby. In this case, only

Normally Night-Duration cards lose some of their power later in the game, but this does not affect Night Watchman as much because it lacks the actual Duration effect. Even playing Night Watchman on your last turns could make a difference. For instance, you could use Night Watchman to get a Moat

into your next hand, which blocks an opponent's Witch

, preventing a 3-pile rush ending on the Curse

pile, and granting you another turn.

Night Watchman performs the worst when you can draw all or most of your deck. In those situations, it may do nothing, or it could trigger an early reshuffle of any junk you discarded that turn. In these cases, look for opportunities to Remodel

Night Watchman into something better for the late-game. 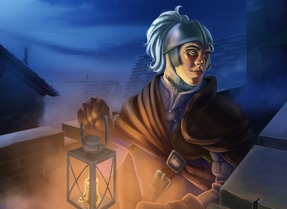 Messing with the top of your deck was one of the things Night cards could do, so here was one doing it. At first it said "when you gain or play this," then it switched to being gained to your hand after Billy suggested that.
—Donald X. Vaccarino, The Secret History of Dominion: Nocturne