Oasis is an Action from Hinterlands. It is a cantrip which gives +

at the expense of discarding a card. It is a decent source of disappearing

Oasis is not a power card. Nor is it weak. As a non-terminal

source with a cost of

it almost always has to be compared with Silver whenever you consider buying it. Oasis is generally worth more than Silver in the circumstances where your deck contains some high-value cards and some junk cards, whereas in a deck of more uniform value, the sifting has less benefit and Silver is probably preferable.

Each play of Oasis decreases your hand size by one and gives you one card of cycling. Oasis is very useful when the discard doesn't hurt you, such as with Watchtower

, or if the discard actively helps you, such as with Menagerie

. It is also very useful in double Tactician decks, since you will be discarding anyway. In other cases, Oasis can be thought of as a cantrip that converts another card in your hand into a Copper

; if there are likely to be dead cards in your hand, Oasis (like other discard-for-value cards like Vault

Generally in any engine where you can't draw your entire deck, Oasis is preferable to Silver since it allows you to find and play your payload cards more often. If you are drawing your deck, Silver

Oasis becomes much less powerful in Big Money games where the cycling isn't as important and you will often just be discarding Coppers in the mid-game which is harmful to your economy. Furthermore, if you really need to reach

quickly, Oasis openings are less likely to get you there than opening Silver/Silver.

Oasis is stronger in the presence of curses or junk cards, especially when they cannot be trashed. In this case, the discard is unlikely to hurt, making Oasis similar in strength to Peddler

, a card generally agreed on to be worth about 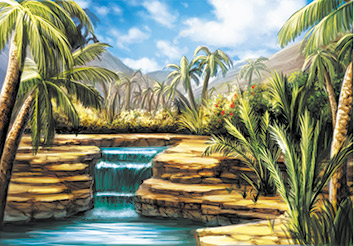 An old card from when Hinterlands was first its own set. Never changed. Some of them have to be simple you know.
—Donald X. Vaccarino, The Secret History of the Hinterlands Cards