Oracle is an Action-Attack from Hinterlands. It only draws 2 cards, but it allows for some filtering and has a mild attack. It is a fairly good pick up for both Big Money games and Engines which need some card draw.

. Let me tell you, Moat for engines isn't that great (though not totally unusable). And Moat for Big Money is also weak as all get out. (This assumes that Moat's defensive function is negligible, of course). But the filtering gives a lot to this card, both in how it affects you and in how it affects your opponent. The thing is, the card is very deceptive. It looks like the benefits to you and the attack on your opponent are totally even, totally mirrored. But in reality, they play very, very differently. This is one of the biggest reasons that the simulators play the card rather poorly. The attack part is largely "Are these better-than-average cards for them?" with a little bit of cycling concern. The sims play this okay now, though it could definitely be improved - you definitely want to know what your opponent is doing, and what's in their deck (how else are you supposed to know what average is?). I suppose also, it depends on the number of Oracles you play in a turn. Totally average (sans cycling issues) is the benchmark for one Oracle, but if you're playing more, you really want to stick them with something bad - if you have more cracks at it, roll the dice.

But you should play the filtering portion on yourself very, very differently. Basically, what you want to do here is ask yourself, do these cards give me a meaningful advantage right now, given what I know about my hand? The knowledge of what's in your hand is huge, and it makes a big difference on how you play things. For example, I'm playing mostly a money deck, and it's toward the endgame. My hand is Silver

. I play and find silver copper for me. Now, this is quite possibly better-than-average here for you. But what will you do with it? Buy a Duchy

. So usually, in these situations, you want to roll the dice - it's very unlikely you won't get at least

back to buy your duchy anyway, and there's a chance you get to your Province. Similarly, if in the same situation, my hand is Gold

Silver Copper Copper Oracle, and I turn up Province Copper, I'm keeping those, buddy - yeah, it's a sucky draw of two cards, but you know, I don't need a good draw; it's good enough, it ensures me a Province, so keep and laugh your way to the bank. No, not the card

The thing is, Oracle looks like a draw card, and it is a draw card, but it does not play very much at all like other draw cards. It's a drawer+filterer. Whereas most draw cards let you draw lots of cards, the only way to get Oracle to really work for you is to have it draw the right cards. Whereas with something like a Smithy

-based engine, you can draw your whole deck (or close to it) relatively easily, this is going to be a tall order with Oracle. To illustrate what I mean by this, I want to look at an Oracle-Festival

engine. Yes, Oracle-Festival. I played this against a strong opponent once, and I distinctly remember him saying something like 'What? But that's no net cards!' (Actually he phrased it differently, but he was shocked at how such a terrible strategy could be doing anything good). The point is, playing Festival then Oracle leaves you, at the end of things, with the same number of cards you started with. You are just spinning your wheels. But every time you spin those wheels, you pick up some money, you pick up a Buy, and most importantly, you get the filtering, which gives you a pretty good chance of having those wheels keep spinning, so you ARE making progress. And you get a little attack on your opponent in the process.

Oracle is at its most powerful when it turns your opponents good cards over (you can make them miss a power card for a whole reshuffle, a strong attack) and when it turns your weak cards over (skip them - a strong filter). When you always use it to put cards back, it's not really better than Moat. Having said that, this means it's good with cards that will have opponents' good cards on the top of their deck (maybe big Scheme

chains? -it's pretty rare), or cards that bring the top of your deck to be pretty junky. This means it works rather poorly with something like Scout

(as if this card needed negative synergy!) and Cartographer

, which often leaves you with a couple green cards on top. It's also good against, say, your opponents' Ghost Ships

- just ship your worst cards to the top of your deck, and skip them.

I find that Oracle is a bit better in engines than it is in Big Money, simply because you get more out of the filtering effect. Yes, the filtering can help you in money, but it tends to help more with engines, where you need a certain type of card and can hunt for it. Also note that you should basically never skip past a pair of your own cantrips (unless you're out of actions), as the benefit of doing this is just getting to the next two cards, which... you get to anyway with the cantrips! There may be some weird reshuffle exceptions....

Speaking of the reshuffle, the last point to talk about here is cycling. Now, I don't think cycling is a HUGE factor on how you should play Oracle, with the following caveat: if going fishing for a better set of two cards will trigger a reshuffle, you really need to consider this as part of your decision-making process when you're trying to figure out whether to hold what you have or roll the dice with two new cards. If you've got lots of good cards in hand or play, you should really consider holding two even less-than-average cards. For instance, if you've got Gold Silver Copper Estate Oracle, and flip up Copper Estate, early in the game, you really want to consider keeping this if you'd otherwise trigger a reshuffle. The reason is, of course, that if you go fishing, you might get your Province, but you for sure lose your Gold Silver and Oracle for another reshuffle, which is something you don't want. And how much better is Province for you than gold at this point anyway? Conversely, if you've got a hand of junk, you might want to throw back a couple of above-average cards, just to make the junk not be in your next reshuffle at all.

While it may seem trivial at first, the order in which you replace the 2 cards does matter if you have a -1 Card token on your deck. 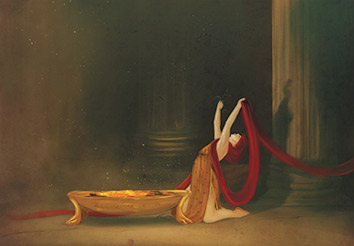 Originally there was a card that had you look at your top two, trash them or discard them or leave them, then draw two. It was too strong, so I axed the trashing and made it a Spy

-like attack. At first that had you always pick one for them to discard, putting the other back, but I found it less oppressive when they had to leave both or discard both. I tried a few when-gain triggers on this card - there was one that trashed a card from your hand when you gained it, one that Navigator

'd once, and one that Chancellor

'd. The Chancellor thing was cute, but made the card too attractive just for the when-gain - meaning, people bought it for that, then happened to be attacking you. The attack was just too annoying to have people buying it when they didn't really mean it.
—Donald X. Vaccarino, The Secret History of the Hinterlands Cards