is an Action card from Seaside. It is a cantrip, meaning that it gives both +1 Card and +1 Action; it rarely hurts to have it in your deck, but its ability to move cards from the bottom of your deck to the top rarely helps very much either.

No comprehensive strategy article exists for this card.

Pearl Diver is a perfect example of a card which very often has no impact on the game. It is never the card you will build a strategy around, but it rarely hurts you if you have

and an extra buy. Pearl Diver is a cantrip with the ability to rescue the card on the bottom of your deck. However, if you play a number of Pearl Diver's you'll quickly find that once you have a bad card there, you aren't getting any real benefit.

Because it is so ignorable, there is almost always something better to buy. It can hurt you in a few situations as well. First, any time you have terminal draw, you risk drawing Pearl Diver dead. Second, by having the Pearl Diver in hand, you lose information about what card you would have drawn had the Pearl Diver been nothing instead. So for instance, if you play a Warehouse

, or your opponent plays a Militia

, you may not know whether to discard the Pearl Diver or something else. It can also make it less likely to have your Moat in hand, or a Curse

in hand against an opponent's Mountebank

. Additionally, it can be used with Throne Room

to act as a Village. Finally, it gives you knowledge of what the top card of your deck is if you use its ability, which can be useful, especially with Mystic 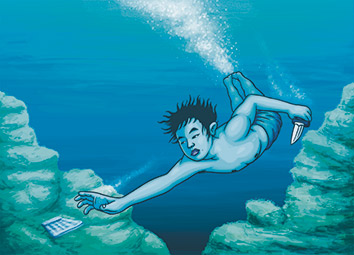 The art depicts playtester Wei-Hwa Huang. He won a tournament at the Gathering of Friends where being depicted was the prize.
—Donald X. Vaccarino, 'Art Trivia'

Borrowed from a later expansion to replace Haven. Nothing changed during testing but the name.
—Donald X. Vaccarino, The Secret History of the Seaside Cards

Pearl Diver is not prized, but it looks reasonable to me, and as I have said many times, if I made all cards better by making them maximally complex, the game would have no players.
—Donald X. Vaccarino, What Donald X. Might Do With a Dominion Time Machine