Peasant is an Action-Traveller card from Adventures. A vanilla +buy card on play, it is the first in a line of five increasingly powerful cards. It can be exchanged for a Soldier

Peasant is regarded as one of the most powerful cards in the game because of its upgrade line, being ranked the #1 card costing from

There is no strategy article for Peasant, but it has been discussed on the forum.

Peasant, on its own, is a weak card; on play, it is strictly inferior to Herbalist

, a weak card to begin with. The main reason to buy it is because of the cards it can upgrade into. Teacher

, the top card in the Peasant traveller line, is a very strong (albeit slow) card that kickstarts any engine by giving out the vanilla bonus tokens (+Card, +Action, +

is a strong Throne Room

variant that gains a copy of the card it doubles. Soldier

can field a lot of

in Kingdoms with multiple Attacks. Wanting any of these cards for your engine is the main reason to buy Peasant.

In a pinch, Peasant can provide +Buy for an engine, not unlike Herbalist or even Ruined Market

. However, you might be better off holding out for Teacher's +Buy token. 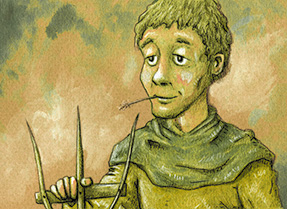 at first (no buy) but that was cwazy.
—Donald X. Vaccarino, The Secret History of Dominion: Adventures