Platinum is a basic Treasure card from Prosperity. It and Colony

may be added to the supply in games using Kingdom cards from Prosperity. The Platinum pile contains 12 cards.

At a cost of

, Platinum is one of the most expensive cards in Dominion; it produces +

when played. Platinum plays roughly the same role in Colony games that Gold

plays in games without Colony—the key high-value Treasure card that you usually need a few of in your deck to be able to afford to buy the top Victory card regularly.

The rules for playing with Platinum are described in the Dominion: Prosperity rulebook and are reproduced here.

There is no article for Platinum. 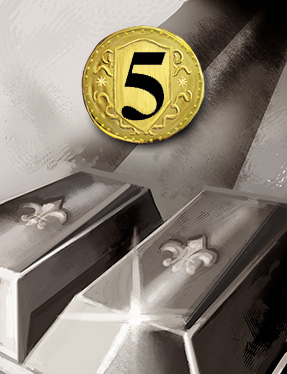 Platinum has had two pieces of official art. The first, depicting a platinum pyramid, was replaced in the second edition update as the art did not go well with the superimposed

As to the meaning of the symbols on the first official art:

The symbols are inspired by some of the made-up writing I had been using on some of my other games (like on the Eight-Minute Empire maps). These symbols basically mean "Pure" and "Rare".
—Ryan Laukat, Artist

is not enough. You have to get to

for Colonies; that doesn't just happen. I bet that

surprised a lot of people.
—Donald X. Vaccarino, The Other Secret History of the Prosperity Cards