Plunder is a Treasure card from Empires. It is a Silver

variant that also provides a 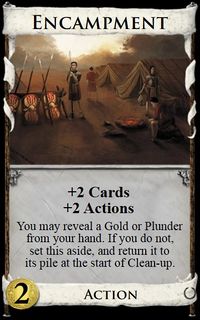 A straightforward card that allows Big Money players to be significantly competitive, this card is a must-buy for most games (except thin-deck engines). Consider the potential of using Crown

on this card to generate even more

tokens, as well as its necessity when using Encampment

You may wish to abstain from buying this card, however, if attack cards such as Pirate Ship

are in the Kingdom. 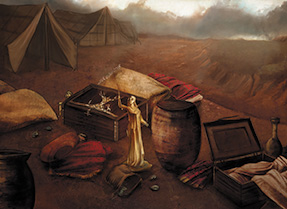 Plunder meanwhile started out as a treasure giving +1 Buy, and +

per Buy you have. It had been its own pile and had seemed cool for a while, but it dominated games, you buy them up as a combo with each other. It's like Bridge

but different in lots of ways and in the end stronger. Even the half-pile version bugged me, and finally I replaced it with a straight treasure version of Monument

. I had already tried a similar card in the set that could sometimes go on your deck when discarded from play, but left that part out for this version.
—Donald X. Vaccarino, The Secret History of the Empires Cards