Province is a basic Victory card included in all games of Dominion. In most games, it is (at

) the most expensive Victory card and (at 6

) the one worth the greatest number of victory points, and emptying the Province supply pile ends the game. For this reason, in many games of Dominion the effective goal is simply to gain more Provinces than your opponents. In games with more than four players, the number of Provinces in the initial supply is increased to three for each player in the game.

The presence of alt-VP cards or Colony

can reduce the importance of Provinces.

Certain Kingdom cards, such as Explorer

, have a special interaction with Provinces.

Cards that interact with Province 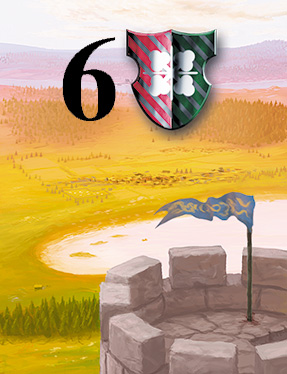 As mentioned in the BGN article, we changed this from 5 VP to 6 VP during development, as part of the fix to the Duchy rush. The Duchy rush was, you buy nothing but Silver and Duchies. At the time the game ended when any Victory pile ran out. If one person went for the Duchy rush you could beat them, but if two people did, you had to join them. My friends found this strategy, but it didn't seem like a problem. It was a boring strategy, so the only reason to play it was if you thought it would win for you. It wouldn't though; it would win for someone at random, since we would all follow suit. You could make the game suck but that's it. So we never did it. Well would you believe, being able to make the game suck is not so hot. Furthermore, if you're a new player, the Duchy rush may elevate your chance of winning from zero to even. So it was in fact a problem. An anonymous playtester realized this, Valerie and Dale raised the alarm, and in the end, Province changed from 5 VP to 6 VP and the end condition changed from "any empty victory pile" (the end condition we were using at the time, but not the original one, which was "any empty pile") to the one you know. We tried ideas that Valerie or Dale came up with, but in the end happened to go with something that I suggested (which is why I didn't count this when I mentioned Thief as the only card they changed). These two changes were easily the most important changes during development.
—Donald X. Vaccarino, The Secret History of the Dominion Cards