Quarry is a Treasure card from Prosperity. It acts like a Copper

that lowers the cost of Action cards by

. It is only really powerful if you plan to purchase a large number of Action cards; therefore it works well in engines with a lot of +buy, but fares poorly in Big Money decks.

There is no comprehensive strategy article for Quarry.

Quarry is fairly straightforward in how you would play it. It only lowers the cost of action cards, so it is like a Gold

for buying actions but a Copper

when buying Treasure or Victory only cards. And unless you are getting a large number of actions, it is likely to be the same as Silver since you often end up overpaying anyway. It is helpful with plenty of +buy from other cards and cheap actions, such as Hamlet

, or if you want to get a high cost action card quickly like Forge

. It is particularly strong in Kingdoms with Grand Market

since 2 Quarries is enough to buy Grand Market, which quickly leads to turns buying multiple Grand Markets for a quick economic explosion.

, the cost-lowering effect of Quarry is cumulative, possibly reducing card costs to

Because Quarry lowers the cost of mixed VP-Action cards, the presence of these cards makes Quarry more valuable. Quarry works well with Nobles

in the presence of +Buy.

Because Quarry only affects action cards, it is typically a bad purchase in a Big Money type game.

With one Quarry in play, Stonemason

, and all other Actions are cheaper as well, so using its overpay ability becomes much easier (except for buying 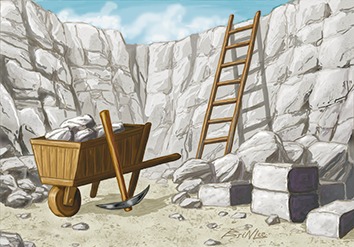 This started out as an action, "+

less this turn." It was in Seaside; this was a better home for it. It left the set at some point, then I brought it back as a treasure, which made it a lot sexier.
—Donald X. Vaccarino, The Other Secret History of the Prosperity Cards