Rabble is an Action-Attack card from Prosperity. It draws 3 cards like a Smithy

, but also attacks the opponents by making them discard Action and Treasure cards from their deck and keeping Victory and Curse

cards on top. It is a weak attack when played only once or in the early or mid-game, but becomes very potent when stacked in the late-game, having the potential to make your opponent start every turn with 3 dead cards in hand.

There isn't a Rabble strategy article, though it was discussed on the forums.

Alone, Rabble is little better than an expensive Smithy

. Up until the mid-game, its attack can even help the opponent by providing cycling, especially if there's a way to trash the starting Estates

. However, in the late-game, a Rabble stack can make an opponent stall hard, giving your engine time to catch up. Typically, a Rabble engine needs a little bit more help from +Buy or from another good engine enabler to be viable.

When playing against Rabble, remember not to green early, and don't start buying Duchies until you have to - any extra green will make the lock that much more powerful. 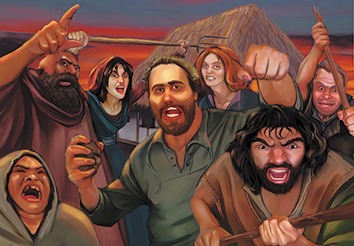 Originally you also revealed your own top 3 cards, discarding the Victory cards. There are two reasons that changed. First, it made the card defend against itself too well, which makes it get played more, which makes the game more oppressive. Second, the card was wordy, and didn't need that extra text to be good enough.
—Donald X. Vaccarino, The Other Secret History of the Prosperity Cards