Ranger is an Action card from Adventures. It is a powerful terminal draw card, but only every other play; it is also a +Buy card.

There is no strategy article for Ranger, but the card has been discussed on the forum.

Ranger is a cheap-ish terminal draw card, that plays a similar role to Smithy

The difficulties of using Ranger are mostly about the careful calibration of when you want it to fire. The first time you use Ranger, it is pretty much useless, but the second time it offers explosive draw. As soon as your engine starts firing, it is advised to make sure the first play of Ranger is the one that draws five cards, even at the cost of losing terminal space the turn before. For example, you draw your deck with Villages and Rangers and maybe some other draw card, and then you play one more Ranger to ensure that your token is face down, so the next time you play a Ranger you'll get +5 cards. 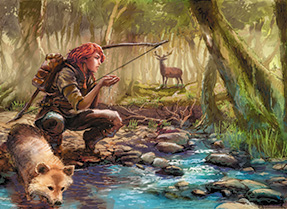 One of the simple things to do with a token was just to use it to make something work at a different speed. With the easiest speed being half speed. Originally this only gave +1 Buy when you got the token face up, but it got the +Buy full time to be slightly simpler, and costs

instead of the original

because now it doesn't compare poorly to Smithy