Recruiter is an Action card from Renaissance. It is a trash-for-benefit card that provides Villagers based on the trashed card's cost. If the trashed card cost more than

when trashed, Recruiter may be non-terminal.

Recruiter is everything one could wish for, it is a strong trasher without reducing hand size while providing Villagers. It excels at trashing Estates

and allows your deck to rely far less on other villages. You will want to buy one the first time you hit

in almost every game.

Most of the time one Recruiter is all your deck will need, and will have many benefits:

In combination with gainers

Recruiter plays quite differently with gainers, because they gain fodder for your Recruiter. You can forego villages and build your deck in a more aggressively way that would normally be over-terminal with Recruiter alone. For example, trashing a Gold

gives a net +5 Villagers (because playing Recruiter used an Action), which is quite powerful, even after accounting for the effort of gaining the Gold

Unlike villages, you can stockpile Villagers and use them in one big turn with cards that become especially strong when played in multiples, like Bridge 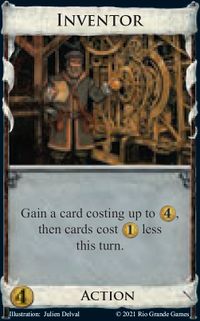 . This can enable so-called megaturns, where you drain most or all of the Provinces

or end the game by emptying three Supply piles, which would usually require a lot of villages. Playing toward a megaturn can often win faster than a more traditional approach, and should be considered in Kingdoms that promote megaturns. 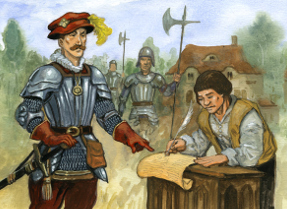 I tried trashing a card for +Coffers, and for a mix of +Coffers and +Villagers. It turned out to be too good of a strategy by itself - just madly convert your cards into tokens. But +Villagers by itself wouldn't have that problem, so I made that card and it was great. A kind of inverse Apprentice

. Then at the last minute it got an Artifact, in order to not have the Artifact on Mountain Village 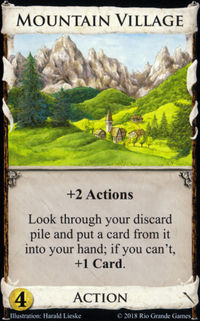 . Then at the very last minute I moved the Artifact to Border Guard

. We'd been happy with Recruiter, and this way I avoided having another card with multiple mechanics.
—Donald X. Vaccarino, The Secret History of Dominion: Renaissance