Remodel is an Action card from the Base set. When played, it makes you trash a card from your hand, and gain a card costing up to

more, thus improving your deck by

; it's one of the first trash-for-benefit cards that players encounter when learning Dominion, and similar cards from future expansions, such as Expand

, are sometimes called the "Remodel family". It can be used on cheap cards, such as Remodeling Estates

or cheap engine pieces, or on expensive cards, such as Remodeling Golds

. It is not very good for trashing Coppers

, since it'll make you gain a 2-cost card you probably don't want.

There is no comprehensive strategy article for Remodel.

Remodel is typically worst for trashing Coppers or Curses, since you're usually forced to pick up not-very-good

-cost cards with it (Estates on boards without

-cost cards). There are exceptions when there are good

-cost cards to gain, such as Lighthouse

is also a good target for Remodelling Coppers: because it can be used as a cantrip, it can speed engine construction, and may also be useful for other reasons, such as its flexibility, or when its +Buy is needed.

-cost engine pieces such as Villages

. Remodel is also very useful in the endgame, when you can trash a Gold

with it to gain a Province

, or trash an engine piece to gain a Duchy

. As an endgame accelerator, it can even be used to Remodel a Province back into a Province, solely for the purpose of ending the game sooner.

usually work worst with Remodel. You can't gain these cards early by trashing Estates, and you can't Remodel them into Provinces either. Usually, buying

-cost cards and Remodelling them is too slow to be an effective strategy: buying a Silver

is usually enough to reliably boost your buying power up to

, but the Silver remaining in the deck provides sustained benefits. In the endgame though, Silver can be Remodelled into a Duchy

, and some engines may benefit from the occasional Remodelling of

-cost cards so long as this is not a primary strategy.

You may be tempted to try a turbo-Remodel strategy where you aim to Remodel your Estates into more Remodels, then Remodel Remodels into Golds, then Remodel Golds to Provinces. This approach of slowly building up value with Remodels is usually too slow to be effective. 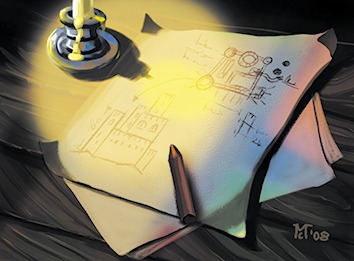 Another very early card with no story.
—Donald X. Vaccarino, The Secret History of the Dominion Cards