Replace is an Action–Attack card from the second edition of Intrigue. It is a remodeler that can be used as a curser as well if you use it to gain a Victory card.

One rule of thumb in Dominion is that

costs are much stronger than

, except with some tricks. It Curses when you gain a Victory card, and topdecks the card if you don’t. Is this really worth the jump from

Yes. The answer is yes.

Part of this is that Remodel is just a good card, so even a small upgrade on Remodel makes it worthy of costing

. However, both the topdecking and Cursing from Replace are more important than they may first appear.

One common play pattern with Remodel is to remodel Silver

cost. As mentioned earlier, these

costs are much stronger than the

cost you trash to gain them. Doing this trash is often the correct play, but you do lose some tempo, because you can’t play the

cost you trashed and you won’t get to play the

cost you gained until your next shuffle. The topdecking from Replace removes much of the tempo loss, since you’ll be able to play the new card on your next turn, or possibly this turn if you have the spare draw.

The Cursing, however, is where Replace shines. The other common play pattern with Remodel is to buy Golds

or a Gold gainer, then use Remodel to turn those Golds or other

. Optionally, those Provinces can then be remodelled into other Provinces to end the game faster. Replace does the same job, but hands out Curses while doing it. These Curses are a big part of Replace’s power. Generally, trash-for-benefit cards let the winning player end the game faster, because they can trash Provinces into other Provinces. In Replace’s case, this works in your favor. Cursing slows down your opponent, and Replace does so at a time where it’s critical that your opponent contest

and line up their own Replace with trash targets. A Province to Province trash doesn’t just end the game sooner, it also gives your opponent -1

. By the time they deal with the Curses, the game may be close to ending.

This cursing is strong enough that Replace trashing Copper into Estate isn’t the worst thing. I mean, it isn’t great. I’d rather gain actual cards. But it’s an okay last-resort option if you don’t have other viable remodel targets. At least you and your opponent both get junked. Replace is also decent at getting rid of Curses – Curse into Estate

giving out a Curse is a 3 VP swing in late game.

For these reasons, although Replace isn’t the most powerful

, it’s often worth buying one or two copies. The pile control and Curse potential it offers is too useful to ignore. 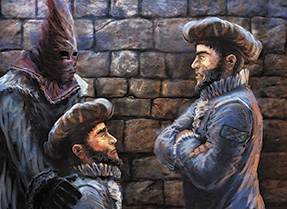 An attack, so ostensibly replacing Saboteur

that gave bonuses based on what was trashed/gained was an old idea. Prior to that I had a bonus based on the types of the first card you bought; that was fun but the delay in-between playing it and it doing something was poor. Making it a Remodel fixed that. I tried different bonuses for the three types, but it was too wordy. I tried giving you a copy of the card if it was an Action or Treasure; that was too strong. The Cursing part stayed constant. It's cool that it's a Witch

to hit you, or this is one of those games with Nobles