Rogue is an Action-Attack card from Dark Ages. It is a terminal Silver, so it helps your current turn; if there are any cards of the right cost in the trash, Rogue will make you gain one of them. If there aren't Rogue will try and make your opponent trash one, so you can steal it!

See here for a discussion of Rogue on the forums.

Rogue is a terminal payload card that is generally considered pretty weak. Compared to Knights

, it only ever offers the + 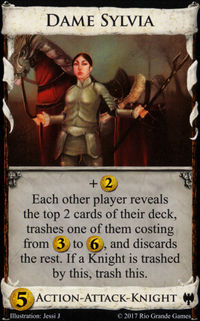 is only so impressive) and some of the time it has a different yet equally lukewarm effect, and you pretty rarely exert control over how much to use either effect over the other.

It is pretty much exclusively an engine card, and it really only wants to be used against engines; big money doesn't really care for it, since you aren't interested in stealing engine components, and it is generally weak against big money, since it'll whiff on Coppers, Estates, and Provinces quite often, and even hitting Silvers isn't very impressive. The same goes for slogs. However, that being said, in engine mirrors it is nothing to sneeze at, especially when there is only one village pile. Intuitively, it is at its best when many of the cards in your opponent's deck are

that you also want.

Being a payload card, the biggest question is, how soon should one get this over engine components? It is a gainer after all, and it gives an extra

. Well, that's a pretty hard question to answer—hitting your opponent's critical engine component early on is pretty cash, that's why you open Swindler

/Swindler. Another weird component is, in the midgame, there is a strange period of time where it is only likely to flip up one card that it can trash, meaning that your opponent is denied the choice of which card to trash. However, it is generally a safe bet to build for a minute before getting Rogues; it is kind of embarrassing when they miss, or when it clogs your starting hand and it's like, you took a risk that backfired with a card that's not even that good.

Here is a graph illustrating the dynamic power level of Rogue, in Garamond for your viewing pleasure. 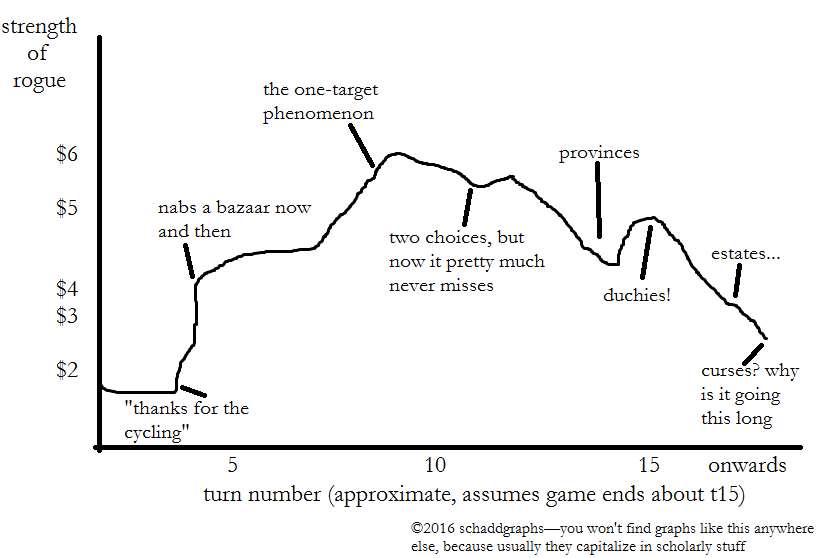 As few error bars as that graph has, there are quite a lot of little things that make Rogue better and worse, perhaps more than most play-it-a-lot payload cards. For example, one can completely sidestep Rogue by buying

cards in bulk, especially if there is some way to buff them using Adventures tokens. Alternately, Rogue is able to hit certain strategies, such as Fairgrounds

, particularly hard—there is a strong victory card right at the top of the trashing range, and Rogue can unpredictably pluck away uniques and take them for oneself, meaning the Fairgrounds player might have to get more uniques than they bargained for. Additionally, in the presence of trash-for-benefit, you can make use of the gaining ability of Rogue particularly often (or, force your opponent to; the attack part is pretty good as well). If you think Rogue might be the way to go this game, reaaally take a second and make sure you have a handle on what it would actually do when you play it. 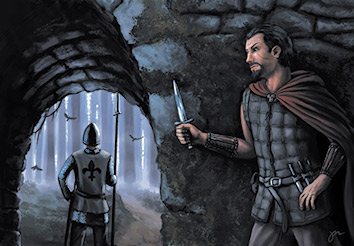 Back when, Intrigue had a card called Bandit: "Each other player reveals the top 2 cards of his deck and trashes one. Gain one of the trashed cards." For

. So, like a Thief that can steal anything, although the attacked player got to pick what to lose. Like Thief, Bandit would helpfully eat Coppers for your opponents, but at least it threatened to take Provinces later. I tweaked it into a card that cost

, looked at the top 3 cards, and only trashed stuff costing from

. Then I took it out of the set. It was slowing games down and did not have that certain something.

A few years later, I made a new version as what Urchin turned into. It looked at the top two now, still trashing something for from

. This was in the set for a while, then got upped to taking any

card from the trash, not just one that was just trashed. But one day I got too fed up with it. The problem was, it was the kind of attack you might feel like buying to fight itself, only you couldn't - you had to buy Urchins and get them to upgrade, which can take a while when you start on it later. Bandit was normally just a thorn in your side, but some games it would get played a ton and take your stuff and you couldn't even get in on it.

So, I replaced what Urchin turned into with Mercenary, and made this new Bandit, now a Rogue. He only trashes or gains, not both at once, and he can't trash if there's anything to gain. He does make +

though, which makes all the difference. Some games there is stuff in the trash right away, like Hermits, and the Rogue never gets to trash cards, but well that's the kindler gentler Dark Ages that people prefer.
—Donald X. Vaccarino, The Secret History of the Dark Ages Cards