Royal Blacksmith is an Action card from Empires. It is a terminal draw card and can be a sifter, and is a Debt card. It forces you to discard all Coppers

in your hand after drawing; it would thus behoove the player to either get rid of their Coppers before acquiring one, or find some way to get Coppers back out of their discard pile afterwards. 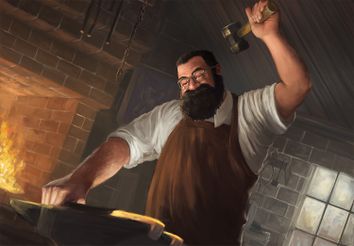 This card was originally called Old Blacksmith, but upon seeing the art submitted for it, Donald X decided the blacksmith depicted did not look "Old", and changed the name. Because of this, Royal Blacksmith comes before Overlord

in the rulebook, and on the box's inlay.

and draws a lot of cards. It doesn't let you keep the Coppers and well you may want to do something about that. I like to show off at least a few simple cards, and Royal Blacksmith and City Quarter

are both pretty simple, other than wondering about that red hexagon.
—Donald X. Vaccarino, Empires Previews #1: Debt

One of the first

cards was +5 Cards, you may put your deck into your discard pile. It cost

at first, but varied. For a while it seemed like one of the more reasonable Debt cards. It wasn't good immediately, when your deck had mostly Coppers. Or was it? Gradually I got disenchanted with the deck-flipping; it was there to make you less sad to draw at the bottom of your deck, but sometimes meant you got it in every hand when you weren't actually drawing your whole deck. You zoomed to victory or didn't, depending on where it was in your deck. Then I got focused on wanting the big

cards to really not be good right away. I replaced the flipping with "discard the Coppers" and well there it is.
—Donald X. Vaccarino, The Secret History of the Empires Cards