Ruined Market is an Action–Ruins from Dark Ages. It is typically given out by Looters, but can be bought if it is the top card of the Ruins pile. When played, it just gives +1 Buy.

, and minor filtering of the other Ruins are something you'd probably never want, there will be situations where the Kingdom has all the components for a roaring engine... but no +Buy! In that case, spotting the rare opportunity to deliberately buy a Ruins could win you the game and the eternal admiration of your playgroup. 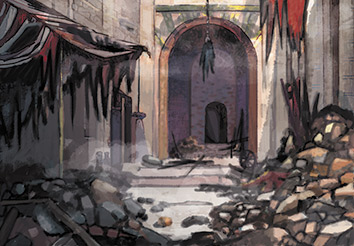 ! I am betting you can guess what three of the other Ruinses do. The last one will remain a small mystery until next week. Looking at the art, it appears that that Ruined Market was once Grand. It’s hard times for all of us. Once you get given a Ruined Market, well, it’s pretty bad, but it does do something. You don’t usually want it – though it has a certain charm in a Fairgrounds

deck – but who knows, maybe that +1 Buy will come in handy. So it’s like a Curse