Scheme is an Action card from Hinterlands. Often a very powerful card, it allows you to place back on top of your deck an Action that you played this turn. This allows for good consistency in what you can play each turn.

Scheme is, quite simply, awesome. It’s basically like the stage crew for a rock band. It’s never standing in the limelight, and really isn’t anything special on its own, but it works to let the main players do their job. Without it the band has much less time to rock out and compose killer riffs and snort coke and … I think this analogy got away from me. Anyway, Scheme is very often worth a pick up as it lends itself very well to most engines and can be used for several very clever plays.

We’ve all had games where we play a Torturer

only to draw 3 Villages dead. Well Scheme gives you all the benefits of a complex engine, while reducing the variance of shuffle luck, sometimes to zero. Being able to top-deck a Village

pair or a couple of Hunting Parties

or whatever else it is that makes your engine go is an amazingly useful ability. Almost any engine can benefit from the addition of some Schemes.

Of course, there is a balance to strike. Every time you buy a Scheme, you aren’t buying another engine component. So in a sense, Scheme sacrifices raw power for reliability. Normally this is a good thing, but it can be taken too far. If you find yourself returning way more actions than you need to draw your deck or the Schemes themselves because you don’t have enough other things to return, you’ve likely over-invested.

Scheme is therefore best when you drop to

and can’t afford an engine part. It is easy to buy Scheme over Silver in most engine games, but more of a dilemma picking Scheme over Fishing Village

In Big Money type decks which only buy a few actions, Scheme can, essentially, act like a second copy of whatever flavor of terminal action you’re using. Instead of Witch

/Big Money, you can simulate Witch/Witch/Big Money without the risk that the second “copy” of Witch will collide with the first. This, however, comes at a price. Whenever you draw your Scheme after your terminal, you only get to play the terminal once that reshuffle. Had the Scheme been an actual second copy of the action, you’d have gotten two plays. Over the course of a game, the double terminal deck gets more plays of the terminal action than the Scheme/terminal deck. So typically, you favor a second terminal over a Scheme.

However, when a card is more important to play early, where the chance of collision is higher, Scheme/terminal becomes the better option. Specific examples of terminals which benefit from a Scheme include Jack of all Trades

is definitely the king of Scheme combos and deserves its own section. Ordinary Schemes can be used for reliability, but King's Court takes it to the next level and pushes Scheme to the point of abusiveness. The key is that a KC Scheme lets you return three cards to the top of your deck, including the KC and the Scheme itself. So technically, you don’t even need anything else: KC/KC/Scheme/Scheme/Scheme lets you start every turn with 9 cards, guaranteed. But there’s no reason not to push the envelope. Replace that third Scheme with just about anything, and you can create ridiculous games:

[edit] When Not to Buy

Scheme isn’t a card you always want to buy. It’s typically a great addition to any engine and can potentially boost a Big Money deck but there are some specific times when you might want to avoid them.

The one true counter: There is one card which absolutely destroys Scheme. I am referring of course to Minion

. Not only does it force you discard the nice things you top-decked, but because you are discarding your good cards, the pool you have to draw your new 4 card hand is weaker. Double Ouch.

Discard attacks: While not enough to completely forgo Scheme, discard attacks do discourage it a little. First, you don’t want to top-deck too many cards because you’ll just have to ditch them. This is in particular bad for KC/KC/Scheme/Scheme/X combos. Second, you might want to hold on to Schemes when you get hit, but the blind draw on them could mean you end up discarding a better card from hand than what you draw, which creates a bit of a dilemma. If there are discard attacks around, more than 3 Schemes is never going to help, unless you're top-decking a Moat

is a good example. 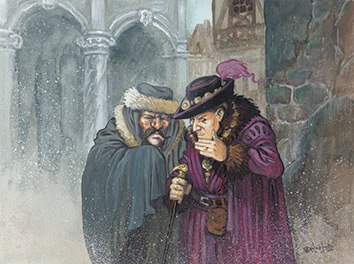 Scheme had a minor functional change when Dominion was updated for its second edition. Previously, cards that were not discarded from play during Clean-up (such as Durations) could be chosen by Scheme's effect; this is no longer possible.

An old card. The premise was always the same, but the exact mechanism has varied a little. The important thing was not to have any weirdness with one-shots or duration cards or Throne Rooms played on duration cards. That's why it only works on cards that are discarded. Sometimes Scheme could work on itself, sometimes it couldn't, depending on what phrasing seemed simpler. It ended up working on itself; you can just be planning that Scheme for a while.
—Donald X. Vaccarino, The Secret History of the Hinterlands Cards