Seer is an Action card from Renaissance. It is a cantrip that draws the mid-level cards from the top 3 cards of the player's deck; it draws neither junk nor high-value cards. 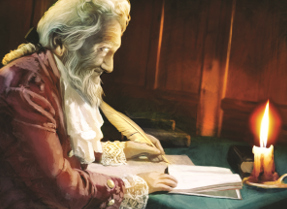 . Those aren't your best cards but hey, you could get three of them.
—Donald X. Vaccarino, Renaissance Previews #1: Mountain Village, Priest, Seer, Scholar, Experiment

At first it got you cards costing