Smithy is an Action card from the Base set. It is a terminal, meaning it provides no +Action; its ability to increase your handsize by drawing 3 cards is useful both in Big Money and engine decks. Similar cards from other expansions, which also give +Cards but no +Action, are sometimes generically referred to as Smithies.

There is no strategy article specifically for Smithy.

One of the simplest basic strategies you learn which is surprisingly effective in the base set is “Smithy Big Money”. The idea of this strategy is to open Smithy/Silver

, add a second Smithy sometime after a couple shuffles, and other than that, buy just money and Victory cards. You can add in some card to help with the late game, like Market

, but for the most part, it’s just a couple Smithies and money. The idea is that the Smithy is going to draw you up to 7 cards, and with 7 cards, you can very often buy Gold

. And when you have enough Silver/Gold, you can often buy Provinces

When you add in some expansions with more trashing and other engine-friendly cards, as well as cards that are better than Smithy with “Big Money” strategies, Smithy BM becomes pretty weak. But there are some variants of it that you may at times go for, particularly when there is no way to quickly build a strong engine. The "canonical" 2-player Smithy-money strategy is algorithmic and works with the following buy rules:

This strategy will typically get 4-5 Provinces and a few Duchies in 14-16 turns; this is often good enough to beat a mediocre or poorly constructed engine. It's especially useful as a comparison - whenever you come up with a cute strategy, you should check that it really does do better than Smithy+Big Money.

While you want to take it easy on the actions, you’re more than happy to grab Kingdom treasure cards like Fool's Gold

or Horn of Plenty

, which are primarily for engines, and not Philosopher's Stone

cost makes it too slow for a fast BM strat). Kingdom treasures tend to make terminal draw BM stronger, so the presence of one of these cards may steer you be more likely to play terminal draw BM. Terminal draw BM decks are really set back by drawing

(which is a little too much for a Silver but not enough for a Gold), so being able to buy Venture is a real benefit.

On the flip side, strong engine parts and Colonies

are real drawbacks to running a terminal draw big money strategy. Your slow-but-steady “tortoise” strategy is more likely to be hammered down by a game-ending mega-turn “hare” strategy.

A couple of tactics also show up in terminal draw BM games. If playing your draw card will trigger a reshuffle, you have to weigh the benefits. Usually it’s worth it, since skipping this play of the card is usually just as bad as having it miss the shuffle, but if it’s not going to improve your buying power, you should skip it.

When it comes down to Duchy dancing, you want to keep track of your oppnent's key cards: their terminal drawers and their Golds. For Smithy BM, for example, once you’re well into greening, Province turns typically require Smithy+Gold or 2xGold. So if you can tell from previous turns that your opponent can’t have one of these hands, you may want to break the Penultimate Province Rule. 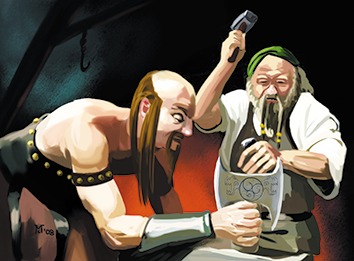 Another early card that never changed. It wasn't one of the first 10 cards though. At the beginning I was worried that drawing your whole deck would be bad. Soon I realized it was in fact fun.
—Donald X. Vaccarino, The Secret History of the Dominion Cards