Spoils is a one-shot equivalent of Gold

that some Dark Ages cards allow players to gain; it is a non-Supply card. There are 15 Spoils cards available, and when one is played it returns to the pile to be gained again later.

Aside from its synergy with Counterfeit

, Spoils can play very differently depending on how you get it. If you get it via Marauder

, you're probably using it to bootstrap your way out of a junked-up early game where you can barely get to

amidst the Ruins and Marauders. If you get it via Bandit Camp

, you're probably running a sleek engine. If you get it via Pillage

Despite the temptation to keep a Spoils and not play it, since it'll go away as soon as you use it, it's rarely the right play to "save up" Spoils for future use. It'll be a while until you see it again! Better to get a good card now, or even just a Silver

if you have no coin in your hand besides the Spoils. On the other hand, you should count how much

. You don't have to play all of your Treasures! 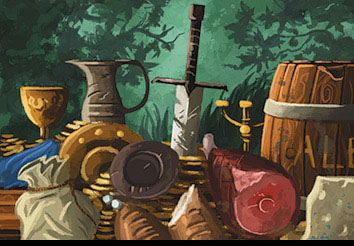 Spoils is a one-shot Gold. That makes Pillage a one-shot that gets you two one-shots. You can't buy Spoils; there are three different ways to get it, and the other two get you them repeatedly. A one-shot Gold is pretty good if you were only drawing it once anyway, or if you didn't really want Gold in the long run, and if those things aren't true well hey it's still something.

There are 15 Spoils. I have seen them run out (temporarily of course) but it's rare.
—Donald X. Vaccarino, Dark Ages Preview #4: Rats, Pillage, Spoils

One day looking through my ideas file I decided it was time to try out "card that makes a one-shot Gold." The first version was just that: cost

, you gain a Spoils. It seemed cute but was weak, so I gave it +1 Action. At that point it still seemed weak, but people bought it anyway.

I knew some people would be all, where are the other cards that make Spoils? And I was not possibly giving them another way to get Madmen or Mercenaries. So I thought, maybe three cards total could make Spoils. So I went looking for something else to stick Spoils on. It ended up on Marauder, Pillage, and Bandit Camp.

Then the original card died, because it just didn't have much going for it at that point.

You originally trashed Spoils, and could get them from the trash. It seemed simpler if they returned to the pile. It drops some words from the three cards that give them out, and matches Madman. Forager can still put a Spoils in the trash, it just doesn't get that handed to it for nothing.
—Donald X. Vaccarino, The Secret History of the Dark Ages Cards