Stables is an Action card from Hinterlands. Stables allows you to discard a Treasure, usually Copper, to draw 3 cards and get +1 Action. It's a generally powerful card drawer as long as you have Coppers to discard.

Stables is a good card, similar to Laboratory

. Like Lab, it can work well both in an engine and in a big money strategy. The requirement that you discard a Treasure puts the net gain at 1 card, like Lab. The requirement to discard a treasure can be a downside, if you draw the card without treasure. However, Stables provides sifting and greater deck cycling, giving it an advantage over Lab in some situations.

When used to discard a Copper, Stables is generally stronger than Lab. Stables is thus at its best in decks which have a heterogeneous treasure composition, with a lot of copper interspersed with Gold

. A deck with more consistent treasure value, like a deck of mostly Silver

Stables alone is not enough to facilitate Treasure Map

strategies, but Stables becomes stronger in a deck based on Treasure Map, such as in the presence of Warehouse

, as Treasure Maps produce a distribution of resources ideal for Stables: lots of copper but with a bunch of Gold mixed in, and probably not much spent on Silver.

Stables is harmed by discard attacks more than Lab. A Lab can be held in the hand, guaranteeing a draw of 2 cards, but a Stables requires holding an additional treasure to be discarded, leaving only 1 other card to be kept. This results in greater uncertainty and a higher risk of a sub-optimal play being made.

At times, the decision of whether or not to play Stables to discard a better treasure, like a Gold

, can be tricky, especially if the average value of your deck is low and the treasure is needed to reach a key price point. 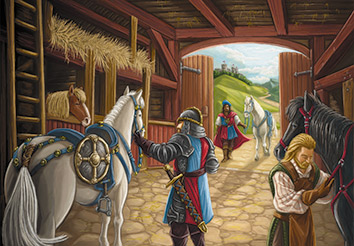 Originally you drew the cards, then discarded a Treasure. If you had no Treasure to discard, yeeha. That version was too strong.
—Donald X. Vaccarino, The Secret History of the Hinterlands Cards