Steward is an Action card from Intrigue. Keeping with the choices theme in Intrigue, Steward gives you a choice of whether to use it as a trasher, a terminal Silver, or terminal card draw. It is most often used as a fairly fast early-game trasher, especially when setting up an engine, with some mid- and late-game uses.

There is no strategy article for Steward.

Steward is a generally strong and flexible card, and is one of the better enablers of engine strategies; it was ranked #3 on the January 2011 Five Best

Steward is most commonly used as an early-game trasher with late-game utility; trashing two cards at once is good enough trashing to set up a reasonable engine, and it can be used as a terminal silver or weak terminal draw once there are no longer any good trashing targets.

if you draw Steward with 3-4 Coppers on your first shuffle. This is discussed in this forum post; the opinion of good players seems to be that trashing will usually be the right choice (since, after all, why would you have bought the Steward if you didn't want the early trashing?) but this is by no means settled for all cases. A rare exception can sometimes be made for scenarios like being able to buy Goons

on turns 3 or 4. The case for trashing is especially strengthened when there is a good

Kingdom card option (such as Pawn

). Since, trashing will often leave you with

buying power remaining in your hand.

Steward can be used as a mediocre Big Money enabler, as discussed here. Steward is optionally a terminal drawer, but because it also has a strong trashing option, it lends itself much more to setting up engines than to being played in BM. In the unlikely event that you choose to play it in BM, you’re basically only going to want to use the trash ability if you’re not hurting your buying power. You’ll tend to use the +

more early and use the +2 cards when +

seems relatively weak (e.g. it gets you to

[edit] Comparisons with other early-game trashers

Steward has a similar effect to other early-game trashers, and is often compared to them. Usually you will only want to buy one such card.

is on the board, Chapel is significantly faster at setting up an engine. Although Steward does retain more late-game utility and has greater flexibility, it is still weaker in most circumstances. Remake

is also somewhat similar as an early-game trasher; which is a better buy depends heavily on what upgrade options are available for Remake. Unlike Chapel or Remake, Steward works very well with Throne Room

, which enable the card to be used for a combination of draw, coin, and trashing, as need be. 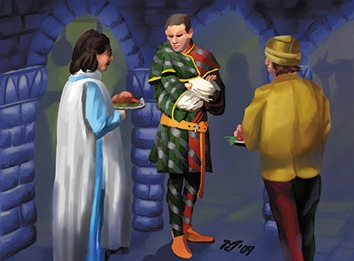 . It wasn't interesting enough, so I traded in the Actions and Buys for trashing two cards.

I changed a few card names late in the process, to synch things up better with the Intrigue theme, and confuse the playtesters. This card had been named Butler. As it happens, a medieval butler was a wine guy. A steward was the guy who ran your castle. Anyway when the art came in for Steward, it showed a guy with some serving dishes. Like a steward on an airplane. Also Pawn

came in showing someone being forced to sign something. As you can see, we got replacement art. As of Seaside we are providing notes on what the card names mean for the artists. These aren't always just your everyday words here.
—Donald X. Vaccarino, The Secret History of the Intrigue Cards