Storeroom is an Action card from Dark Ages. It is a terminal sifter, which lets you discard cards first to draw more cards, and then for

Original article by Qvist, originally posted on the forum

– Reaction – 1 Action + Buy = Storeroom... End of Article? No, it’s not that simple. At first glance it seems like a boring straightforward card. But I think it offers more than it seems.

I make no claim that this article is complete, I just wanted to point out some observations that I made about this “seemingly innocent card”.

Storeroom is more like an upgraded Secret Chamber (without its Reaction) than an upgraded Cellar. The lack of +1 Action is what makes Cellar a decent addition to any engine, but in engines with strong terminals Storeroom hurts more than it may help. It’s also bad on boards with discard attacks because – like all discarders – it needs big handsizes to be really useful.

So, what is it good for? 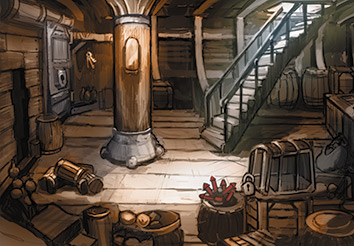 The art for Storeroom is the only known instance of official card art being used on isotropic, probably due to it being turned in for an earlier set.

This art was turned in as an alternate option for Vault

This was an old idea that I had briefly tried and forgotten about long ago. I wanted a card-filterer to help dig through your Ruins and saw this on a list and thought hey, let's try that again.
—Donald X. Vaccarino, The Secret History of the Dark Ages Cards